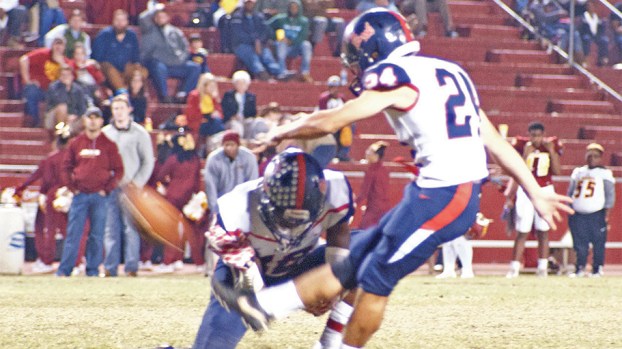 In the wide circle of red and blue mourners that grew near the east end zone after the defeat, he seemed a little out of place.

He spoke to everybody who came up to him, not too hurt to take comfort where it was offered and give it back where it was needed. He shook every hand and spoke softly to every ear, his words a whisper against the awful notes of the Laurel alma mater, played for the victors 100 yards away. Tears flowed hot down the cheeks of linemen and mommas and daddies, but he just held his helmet in both hands, smiled and said what he could to heartbroken teammates and wet-faced Brookhaven folks who thanked him, hung their heads on his shoulder pads and cried.

The end of the Ole Brook football season at the hands of Laurel Friday night hurt everybody’s feelings, but Brookhaven senior kicker Tyler Mixon seemed to be in state of grudging peace, somehow somber and satisfied at once. He’d performed well in the game, but he didn’t do it for coaches or trophies or approval from the fans.

Mixon kicked for the sake of spirits, and his approval came from the other side of the grave.

“I’m praying before every kick. I say, ‘I’m going to do this for my brother Jordan and my brother Cody,’” he said.

With his mind on his two dead brothers — sweat-brother Jordan Blackwell, a senior linebacker murdered the Sunday before Memorial Day earlier this year in a mass shooting; and blood-brother Cody Mixon, a sophomore teammate who passed away on Oct. 24 — Mixon kicked a perfect game.

He scored half the team’s points, connecting on all three of his field goal attempts while hitting a career-long of 42 yards, and he nailed his only extra point try of the night. Mixon put the Panthers’ first six points on the board early in the game, salvaging good drives that fell flat and keeping his team in the lead.

Late in the first half when Laurel pinned Brookhaven deep, he dropped back to punt and fired a 53-yarder off his right foot to keep the Golden Tornadoes away from the end zone. Laurel junior return man Levi Walker misjudged Mixon’s kicking power and had to turn and run after the ball, falling to the grass on his own 26-yard line as he reached out to field the punt.

For the season, he finished with 10 field goals and 64 extra points and was second on the team in scoring with 94 total points.

“I hope my brothers can be proud of me now,” Mixon said.

Brookhaven lost the game 26-22 after the Golden Tornadoes controlled the game’s final few minutes, but if Mixon was praying for confirmation from the afterlife, he earned it.

But the kicker can’t stop a great defense, and none of the Panthers could stop Laurel junior running back Zias Perryman from scoring with eight seconds remaining in the game to seal up Brookhaven’s defeat. Ole Brook’s 5A playoff run ended, and with it the season and the high school football careers of Mixon and 13 other Panther seniors.

“I hate that I won’t be able to play with my teammates anymore,” said Brookhaven senior offensive lineman Dedric Smith, after he’d finished crying and hugging in the circle of supporters around the quiet 20-yard line. “I wanted to keep going with my team.”

As the long tail of dazed Panthers and their parents slowly made their way to the visitors’ locker room, junior offensive lineman Coker Wright explained his pain.

“Laurel wasn’t the better team. That’s why it hurts,” he said. “The little things count.”

Ole Brook drove down inside the Laurel 10-yard line on its opening possession, but the Golden Tornadoes defense blew apart the second- and third-down efforts to bring on Mixon for the kick. Brookhaven was back in the red zone on its next possession, but the offensive line lost focus — a false start cost five yards, and blitzing defenders forced junior quarterback Sevante Quinn to throw on the run, missing senior running back Damarrell Leggett, who was wide open on a wheel route that would have terminated in the end zone.

Holding and false start penalties killed Ole Brook’s next drive, and the critical play of the night happened with less than five minutes remaining in the first half when Quinn and sophomore running back J.Q. Edwards misconnected on a handoff that Laurel senior linebacker Dmark Smith scooped up and returned 40 yards for a touchdown. The Golden Tornadoes carried a 7-6 lead into halftime, even though the Panther defense had allowed them nothing.

Another game-killer happened in the middle of the third quarter on a bad snap during a punt. Mixon had to bend down low to pick up the ball and his knee touched during the attempt, giving Laurel the ball in the Ole Brook red zone. They cashed in two plays later to lead 14-6.

Edwards scored late in the third to add six points, and Mixon hit from 39 yards in the middle of the fourth quarter to regain the lead 15-14. Brookhaven stopped a Laurel fake punt and Quinn soon found junior Dorian German for a 23-yard touchdown pass and a 22-14 lead.

It was the high-point of the game, and the last good memory of the season.

Laurel drove down for a touchdown to close the score to 22-20 with 1:32 remaining, then recovered an onside kick that bounced off a Panther. The play of the game happened a few plays later, when the Ole Brook defense lost containment on Laurel junior quarterback Sinclair Ulmer, who rushed down the south sideline to give his team a first down in the red zone with 33 seconds remaining in the game. A few plays later and Perryman was in the end zone for a 26-22 lead, leaving Brookhaven only eight seconds for a failed Hail Mary.

“We had them a couple of times at the end, but we gave up too many plays,” said Ole Brook senior defensive lineman Jeffery Johnson. “I don’t think there was a difference in the game, but the momentum kept shifting and they got it.”

Brookhaven accumulated only 281 yards of total offense, its second-lowest total of the season behind the loss to Pearl. The Panther ground game performed as expected, tallying 48 carries for 258 yards, an average of 5.4 yards per carry. The passing game underperformed, going two of nine, with all 23 yards coming on the single touchdown pass to German. Quinn’s lone interception came on the game-ending Hail Mary and was meaningless.

Brookhaven finished the season 11-2, with all 11 wins coming consecutively between the losses. Laurel will make the short trip to Hattiesburg Friday night for the South State championship. The Panthers will mark its seniors off the board and get ready to train another class of sophomores.

Until next August, its Friday nights are free.

“The thing you don’t need to do when you walk off this field tonight is you do not need to think you’re a loser, cause you’re not,” said Ole Brook head coach Tommy Clopton in an emotional post-game address to his team. “You’ve represented Ole Brook this year the way Ole Brook is supposed to be represented. Jordan (Blackwell) is hurting for you right now, but he would be proud of you and how you played.”