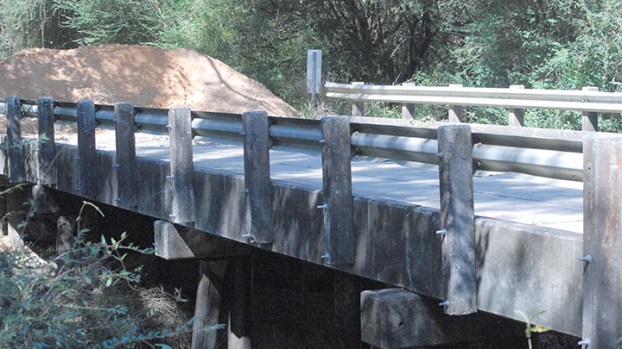 Photo by Donna Campbell/Lincoln County supervisors Monday opened bids for work on several bridges including this bridge over a tributary of Bayou Pierre on Mt. Zion Road. The detour around the closed bridge is causing 320 estimated daily vehicles to take a detour of seven miles.

Repairs to a couple of major county roads bisected because of bad bridges could begin before Christmas, as long as the price is right.

The Lincoln County Board of Supervisors on Monday opened sealed bids for bridge replacement projects on Heucks Retreat and Mt. Zion roads, heavily-traveled routes on opposite ends of District 2 that approximately 600 local commuters are detouring around daily. A second contract under the same bid opening will include Antioch Lane in District 5 and Walley Lane in District 2.

“You better believe we’re making progress,” said District Two Supervisor Bobby Watts. “I had 10 bridges closed — three of them are open now, we bidded out those two today and I have two more coming. I’m looking to get them all back open.”

Laurel-based Magco Inc. submitted the low bid for the work on Heucks Retreat and Mt. Zion, promising to replace both the more than 100-foot spans for approximately $468,000. Brookhaven’s Oddee Smith Construction submitted the only bid for the Antioch and Walley contract, saying it could replace those bridges with concrete box culverts for $398,000.

Supervisors tabled the bids until the next board meeting on Dec. 4 to allow county engineer Ryan Holmes to review the calculations. Bids on both contracts came in below the engineer’s estimates.

“We’ll tabulate the bids and hopefully award them in December and get the work started almost immediately,” Holmes said. “We’ve already talked with the contractors and they’re ready and able to start working.”

Traffic information for Walley Road was not available.

District 5 Supervisor Doug Falvey said he has enough money in his district fund to replace the bridge on Antioch Lane, but supervisors included it in the $5 million bond project list just in case. He said he is waiting to see Holmes’ tabulation of the bids to make sure the Antioch project is appropriately priced — the four bridges were bid out in pairs, so submitted bids must be examined for a per-bridge price — in case supervisors want to reject the bids and readvertise in December.

“The bridge will be fixed one way or another,” Falvey said. “That road has an exit on either end, so it’s not like folks have to go real far out of the way, but it is an inconvenience for sure and we’ll get it fixed.”

The bridges targeted for repair under the project were closed by out-of-state engineering firms contracted through the Mississippi Office of State Aid Road Construction at the command of the USDOT. The back-door inspections fall outside supervisors’ regular four-year inspection cycle, and are being carried out without input from the county engineer or supervisors’ knowledge, they say.

Conflict between supervisors statewide, their engineers, State Aid and MDOT — which was involved in trial inspections earlier this year — over the bridge closures has grown all year, with supervisors claiming the contracted firms are overcharging for inspections while their own bridge-repair fund, the Local System Bridge Replacement and Rehabilitation Program, went unfunded by the Legislature.

The Mississippi Association of Supervisors plans to make noise about the issue at its Mid-Winter Legislative Conference in early January in Jackson.

A Bogue Chitto athlete and his younger cousin were severely injured in an ATV accident Sunday evening in McComb. LaFredrick... read more