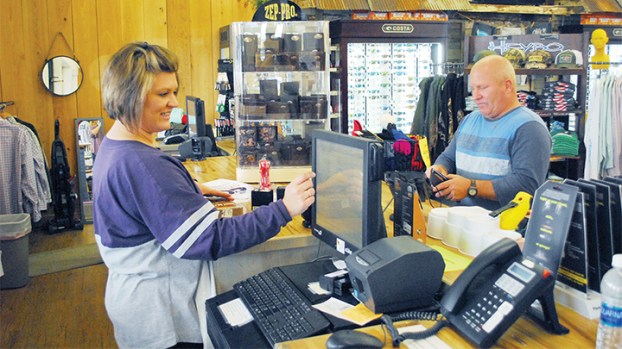 Photo taken by Trapper Kinchen/David Lambert makes a purchase Tuesday at 601 Sports on Brookway Boulevard. Authorities urge shoppers to be on guard ahead of Black Friday, Cyber Monday. Pictured are, from left: Amy Clark and Lambert.

The day after Thanksgiving remains one of the busiest shopping days of the year, and, as Black Friday draws nigh, authorities want consumers to stay vigilant against potential threats.

Customers are most vulnerable to burglary after leaving a store, but it is also important to remain self-aware while browsing merchandise.

“When you’re inside the store shopping, don’t leave your purse unattended,” Tracey Smith, the store manager at 601 Sports, said. “It’s a good idea to keep it on your arm at all times.”

Smith has a broad background in retail, and, over the years, he has witnessed a great deal of in-store pilfering around Christmastime.

“I was a store manager at Wal-Mart, and we had heavy instances of shoplifting,” he said.

In a digital age, businesses and consumers are more vulnerable to theft than ever. Mississippi Attorney General Jim Hood advises checking a website’s security before submitting a payment over the internet on Cyber Monday, and look for card “skimmers” at places where you scan your credit or debit card.

Hood also wants customers to keep track of their purchases this Black Friday. Be careful not to leave shopping bags unattended, and make sure anything left in a vehicle is stored out of sight.

“This time of the year, robberies, burglaries and shopliftings pick up,” Collins said.

“We definitely see an uptick in crime around the holidays, so we focus on responding to that,” he said.

As pressures mount around December, Collins said people sometimes employ desperate tactics to get hold of presents for their families.

“People who ordinarily wouldn’t steal, will do it at Christmastime,” he said.

It is never a good idea to leave delivery items unattended on a porch or carport for very long. Help ensure your home’s safety by keeping all packages hidden from view.

While away from home, be mindful of your surroundings and react accordingly.

“Some shoppers leave their purses in their vehicles, and that’s not a good idea,” she said. “And be sure to lock your cars while you’re shopping. ”

Most BARL pet adoptions are free this Thanksgiving weekend

The Brookhaven Animal Rescue League is offering a Black Friday bargain that sounds too good to be true. The volunteers... read more