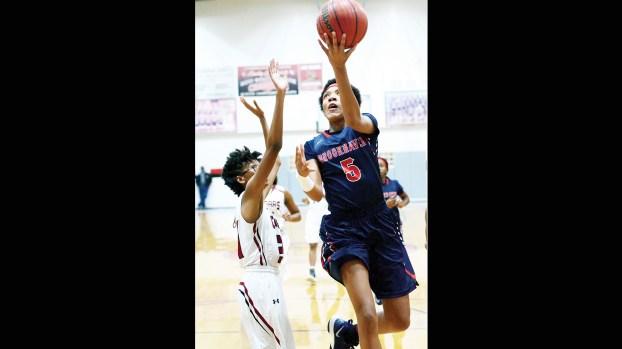 Photo by Adam Northam/Ole Brook sophomore Silentianna Collins gets inside the Lawrence County defense early in Tuesday night’s game matchup, in which the Lady Panthers came from behind to hand the Lady Cougars their first defeat of the season by a score of 45-38.

The Lady Panthers of Brookhaven served Lawrence County’s fearsome Lady Cougars their first loss of the season Tuesday night, coming from behind in a dominant second half to win the game 45-38.

After getting scorched in a second quarter where the ladies of Lawrence could do no wrong, Ole Brook’s girls turned up the heat to force numerous turnovers and shifted their offensive focus to the paint for short-range baskets that ate into the lead. Brookhaven went on top for the first time with one minute remaining in the third quarter and pulled away late in the fourth to spoil Lawrence County’s Thanksgiving tournament.

“In the first half we didn’t do what our coach told us to do. We did our own thing,” said senior Lady Panther Johnique James. “When we came back out we did our press defense and denied the one pass away, and (Lawrence County) started going too fast instead of being patient.”

The first quarter was an even match, with Lawrence County carving out a narrow lead of 12-10, but the Lady Cougars outplayed Ole Brook in the second quarter to take a 27-16 lead into halftime.

It became obvious the Lady Panthers were playing a different kind of game early in the third quarter, when the girls went on a six-point run, eating up the scoring deficit by feeding the ball inside to the junior center Tamia Stallings, who used her size and strength to bull in close for quick baskets. With one minute remaining in the third quarter, she scored a basket, absorbed a foul and hit the and-one to retake the lead 32-31.

Stallings scored 16 points on the night, most of them in the Lady Panthers’ wide-open second half, and grabbed 10 rebounds.

The Ole Brook girls also turned up their defense, causing the Lady Cougars to self-destruct with turnovers. Brookhaven owned the third quarter 16-7, but Lawrence County woke up by the quarter’s end, leaning on their own center — senior Camryn Davis, who battled with Stallings inside and hit a big basket with 24 seconds remaining in the third to put the Lady Cougars back on top.

Davis finished with 15 points and 12 rebounds.

Ole Brook led the game 38-34 with six minutes remaining in the final quarter, and their defense put the game away over the next two minutes as the Lady Cougars committed four consecutive turnovers.

Brookhaven led 40-38 with less than two minutes to go and won the game at the stripe. James went to the line and hit both free throws with under a minute to go, and junior Cynphoni Thompson hit another pair shortly after to put the game out of the Lady Cougars’ reach.

“We made some adjustments at halftime and started going inside with our high-low game, and we were able to sustain our run,” said Lady Panthers coach Preston Wilson. “We try to make teams play faster than they normally play.”

Lawrence County coach Vicki Rutland said her girls seemed to lose confidence late in the game and stopped executing their game plan as the pressure from Brookhaven’s defense mounted. But the old rivalry was a good test for her team, which will remain a force in Region 7-4A.

“I’ll take this loss now if we will learn to do a better job blocking out, at the free throw line and valuing the basketball,” she said. “The reason we play quality teams like Brookhaven is to get us prepared for what we want to accomplish later in the season.”

The Lady Panthers were 10 of 17 from the free throw line and grabbed 28 total rebounds while committing 17 turnovers.

The Lady Panthers improve to 3-1 on the season, with their next game scheduled Tuesday, Nov. 28 at home against Franklin County. The Lady Cougars fall to 5-1 and play at North Pike the same day.

The Lawrence County Cougars stopped a three-game losing streak and closed their Thanksgiving tournament on a high note by beating... read more