City of Brookhaven will convert donated land into a park 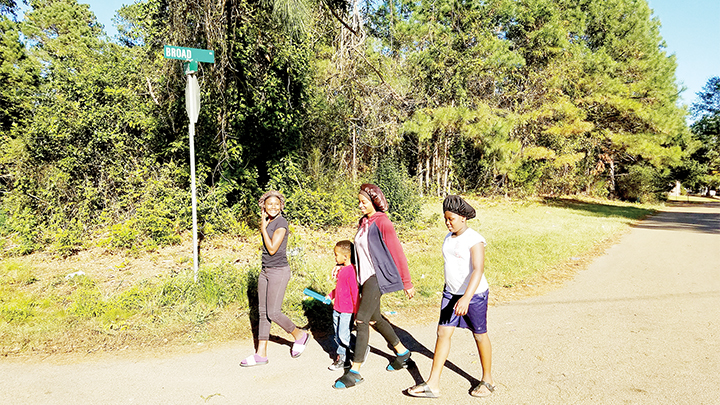 Photo by Donna Campbell/A group of children in the Brignall neighborhood pass a vacant lot Wednesday that will soon be transformed into a community park.

With a donation of land from Habitat for Humanity of Lincoln County, the city plans to transform a vacant overgrown lot in the Brignall neighborhood into a children’s park.

Aldermen Tuesday night voted 4-0 in favor of accepting the land from the organization. Aldermen Shannon Moore and Dorsey Cameron were absent from the vote. Alderman Fletcher Grice is on the Habitat board and recused himself from voting.

If he wasn’t at Disney World celebrating his 50th wedding anniversary, Cameron, the alderman for that area, would have unequivocally voted in favor of accepting the lot, he said.

The area donated is big enough for Habitat to build two houses with yards. Instead, it will become the park Cameron promised his constituents in that area.

Habitat Executive Director Suzanne Smith said the organization bought the land from the city several years ago for the cost of back taxes. Volunteers hoped to be able to build on it.

“We never had a homeowner who was quite the right fit,” she said.

The lot became overgrown like a mini forest in the subdivision. Now that the deed is back in the hands of the city, they can clean it up and get it ready for park equipment.

Cameron plans to start off small, with a basketball court and picnic tables. He’d like to add a pavilion and playground equipment for the children.

“It’ll be a park for the kids to play, a picnic area, a place for the community to come together,” he said.

State Bank has gotten involved with the project and plans to help fund some of the equipment, Cameron said.

He’s hoping to add to the list of partners. Anyone who wants to help create a community park in Brignall can call City Hall at 601-833-2362.

“It’s going to be an asset for the city. I’m excited about it,” he said.

Smith said Habitat is not just in the business of building homes. She’s happy her board of directors were unanimously on board to make the donation.

“It will be an opportunity for Habitat to give back,” she said. “This really fits into their mission, in improving communities, not only just with homes.”

Grice said he’s glad he was able to get Habitat and Cameron together on this project.

“We wanted to put a little green space in that area for the kids to have a place to go,” he said.