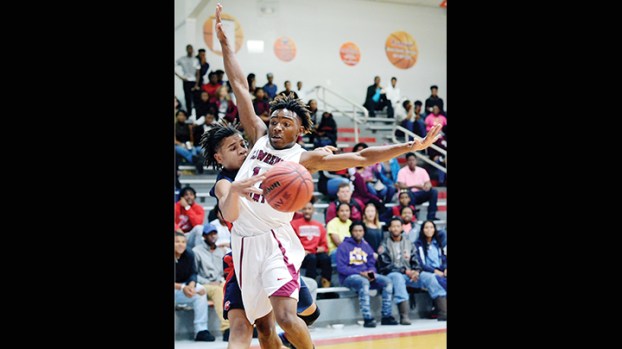 Photo by Adam Northam/Lawrence County senior Reggie Statham (right) inserts himself into the play as Brookhaven junior Trey Lyons tries to attack from the corner in Tuesday night’s game. The Cougars outplayed the Panthers on both ends of the court, winning 53-29.

The Lawrence County Cougars stopped a three-game losing streak and closed their Thanksgiving tournament on a high note by beating the fire out of old adversary Brookhaven 53-29 Tuesday.

The fast-moving Cougars sat on a comfortable lead of around 10 points for most of the game before opening the throttles late to embarrass Ole Brook in a big fourth quarter that saw the Cougars, their passing lanes and the basket wide open. By the time it was over, Lawrence County was having fun on the court, practicing crossover dribbles and funky layups with the frustrated Panthers unable to stop them.

“It’s just what we do,” said Lawrence County junior Darrell Newsome. “We take charges and knock down good shots, and when you knock down outside shots you get set up inside.”

Newsome led both teams in knocking down shots, scoring 19 points that included two from behind the three-point line. He was the centerpiece of a Cougars offense that outscored Brookhaven in every quarter — especially the fourth quarter, which Lawrence County won 17-4 to shut down the Panthers.

But it wasn’t just scoring that put the Cougars so far in front. After a close first quarter that Lawrence County took 15-14, the Cougars continued to make the most of their offensive possessions while their defense held Brookhaven to single digits — five points in the second quarter, six in the third and only four in the fourth.

And so the Cougars were rewarded with 16 defensive rebounds and 15 steals. Statham and senior Josh Earl led the team with four rebounds each, while Statham grabbed more than half the team’s steals with eight.

The Cougars only recorded one offensive rebound on the night, but that’s because most of their shots were good. Behind Newsome, senior Triston Peyton was second in scoring with 14 points, while Statham scored eight and junior Kedarrius Gordan scored six. Senior Kendarius Feazell scored four points, while senior Josh Earl and junior Jeremiah Sumrall got one each on free throws.

With a 27-19 lead at halftime, Lawrence County coach Pat Bridges told his team better defense was needed to stop Brookhaven from hitting so many shots.

“I told them we need to put the clamps on ‘em. Once those 50-50 balls stopped dropping, we opened it up,” he said.

Brookhaven coach Marcus Flippin said after the game the Panthers didn’t take Lawrence County seriously. The Cougars had lost a few games and were blown out by Hazlehurst at home the previous night, and the Ole Brook boys expected to walk in and win with little effort, he said.

It didn’t work that way, and Flippin didn’t object — as the massacre developed late, he took a knee on the sideline and watched his Panthers struggle.

He called no timeouts to stop Lawrence County runs and shouted in no corrections or encouragement.

“I let them do it their way so we can see whose way works best, kind of like my dad did to teach me and I did to teach my kids,” Flippin explained. “That was a message I sent to them. If you don’t do what I ask you to do, that’s what happens, no matter who you play.”

Flippin said the bad loss to Lawrence County should be a learning experience for his Panthers.

“I want them to be embarrassed a little bit,” he said. “They’re good kids, though. They’ll work once they understand you can’t just show up and beat anybody. Our schedule only gets tougher.”

Lawrence County’s win is only their second of the season. They improve to 2-4 and travel to North Pike Tuesday. Brookhaven falls to 2-3 on the year and hosts Franklin County Tuesday.

The Brookhaven Academy Cougars and Lady Cougars squared off with the Parklane Pioneers to wrap up the Thanksgiving Holiday Classic... read more