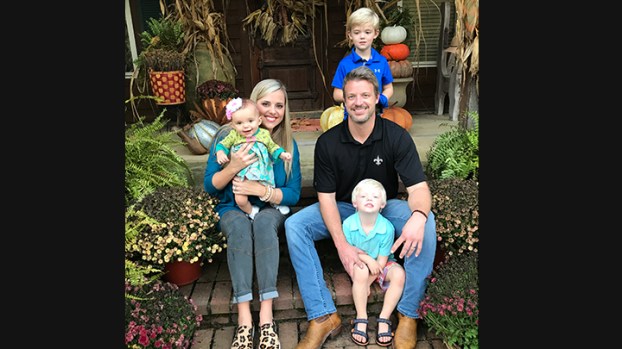 Photo submitted/Sam Sones is the next president of the Brookhaven-Lincoln County Chamber of Commerce. With Sones is wife Brittany and children Sammy, Si and Lottie.

If you run a business in Lincoln County, expect to see Sam Sones come knocking.

Sha Walker, president of the Brookhaven-Lincoln County Chamber of Commerce, will pass the gavel to Sones at the annual Chamber banquet Dec. 5.

The banquet begins at 6 p.m. at Ole Towne Church on South Jackson.

Tickets are $15 and are avail-able at the Chamber of Commerce.

The president-elect and the new Chamber board will be named at the banquet and the Business of the Year will be announced.

Not only is Farm Bureau a business member of the Chamber, Sones holds individual membership as well.

He believes firmly in the benefits that a Chamber membership brings. So much, in fact, that he’s willing to pound some pavement to prove it.

He plans not only to visit businesses in the city and county to recruit new members, but to talk to those who are already on the roster to find out what the Chamber can do better.

“I ask my clients, ‘How can I do better?’ and I don’t always like the answers,” he said. “But those answers are key.”

His father, Bill Sones, was president in the ‘80s and he is happy to walk in his dad’s footsteps. He hopes to be an example to his children as well.

Peter Griffin “My favorite Thanksgiving tradition is having family come together that you haven’t seen in a long time. I... read more