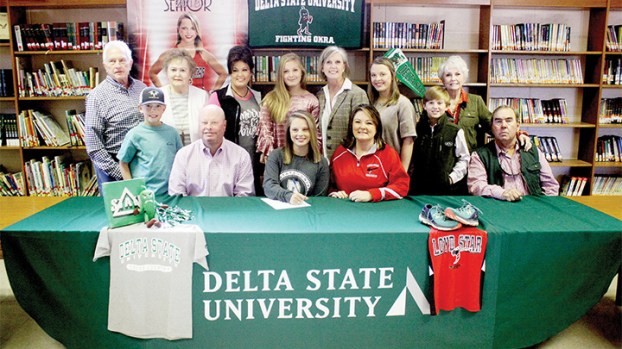 Loyd Star’s Abby Thomas will run for the Okra in 2018 after signing a cross-country scholarship with Delta State University.

The senior runner and past champion signed on the dotted line Friday morning during a ceremony at Loyd Star, becoming the first scholarship athlete in the history of the Hornets’ young running program. With connections to the Delta State cross-country team and family in Cleveland she visits every summer, accepting the scholarship offer made great sense, Thomas said.

“I like the kind of family they have, the bond between all the girls on the team. The program will help me grow as a runner,” said Thomas, who plans to study pre-optometry. “Delta State is going to be a great time for me.”

Thomas has been a core member of the Loyd Star cross-country and track teams since both were founded. She won the South State championship in 2014, 2015 and 2016, finished in the top three in regional competition those same years and placed second in the state championships in 2014 and 2015.

She has also won two state championships in track and is the only Loyd Star athlete to do so.

Thomas, who also plays soccer for Loyd Star, was one of the first students to sign up for cross-country when the program was created. She said she took to cross-country immediately and became a serious runner because of the personal nature of the sport.

“We’ve been watching Abby for several years. She’s had some good seasons and we think she’s got a lot more in her,” he said. “She’s a great kid, with good grades and good character. She’s definitely the total package for our team.”

Loyd Star cross-country coach Michelle Case said Thomas has been the leader of the school’s running programs, always encouraging teammates and pushing them to succeed and even helping pack the bus for events.

“Abby has the best attitude, the best sportsmanship of anyone I’ve ever seen,” Case said. “When she leaves, I don’t know what I’m going to do.”

Case said she hopes Thomas’s scholarship will influence other students to join cross-country. The Loyd Star running teams are in only their third year, having been founded in 2014.

“Cross-country is a sport where, as an individual, you can earn awards and scholarships. Running a sport in which anyone can succeed,” she said.

Thomas’s father, Trey Thomas, is proud of his daughter for earning her way into college.

“She has worked hard to get to this point in her life, I’m glad she is being recognized for her accomplishments,” he said.