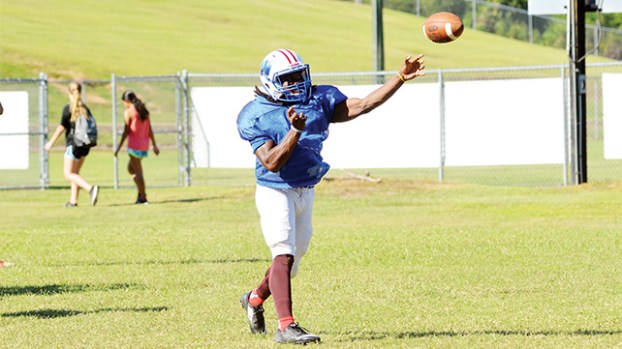 Photo by Adam Northam/Cobras senior quarterback Dell Thigpen is thankful to be chosen as part of the Region 8-3A all-region first team.

This year’s Region 8-3A All-Region football team is a slithering den of Cobras.

“I’m thankful. That’s all I am,” Thigpen said. “It’s wonderful. It feels good to be chosen for these awards because our team played pretty good this season.”

Thigpen led the Cobras in rushing, using the quarterback scramble to deadly effect in a 1,213-yard season that included 13 touchdowns. He also passed for 451 yards and three touchdowns in limited passing plays.

In addition to being selected to the regional first team, Thigpen was also selected as the region’s special teams player of the year after returning nine kicks for 314 yards, including a long of 85 yards. He was also selected to play wide receiver in the Mississippi Association of Coaches’ Bernard Blackwell North/South All-Star Game.

Case amassed a dozen pancake blocks on the offensive line while recording 29 tackles and stripping out one fumble in defensive play. Guess totaled 79 tackles, one sack and caused and recovered a pair of fumbles. He also punted 25 times for 817 yards.

“I’m proud of all of them,” said Wesson coach Jeremy Loy. “They’ve done a good job and had a good season. And I’m proud of Dell. He’s deserving of any honors he gets. I’m excited about him playing in the all-star game — he will represent Wesson well and, hopefully, have a good showing and open up some opportunities in the future.”