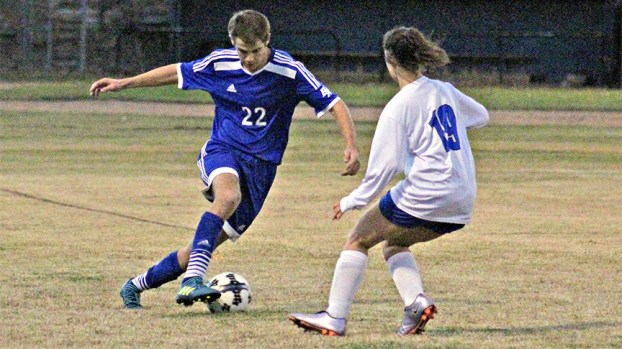 The Eagles jumped out to a two-goal lead in the first half, then allowed Brookhaven Academy to score the next five and lost 7-4.

PCA was playing with the minimum of 11 players because of several injuries, and four of those were girls. PCA fields a co-ed team yet plays against all-boys teams, including Brookhaven.

“With no subs, fatigue is definitely a factor. But they are proving every week, every time they are coming out here, that they’re getting stronger,” PCA coach David Case said. “We’re seeing better communication on the field. We’re seeing better passing. So I’m very proud of them for not quitting, and hanging in there and just keeping on playing.”

Of its 11 available players, PCA also had two eighth-graders and one ninth-grader on the field. One of those was eighth-grade goal keeper Zac Moore, who let in one soft goal on a 50-yard shot by Brookhaven’s Wyatt Schwede but also made a couple of solid saves. On one sequence in the first half he stopped one shot and then a rebound attempt from point blank range.

PCA has gotten out to a 1-3 start, but considering the lack of depth and inexperience Case said he’s been pleased with the overall effort thus far.

Cameron Harvey scored three of PCA’s four goals on Monday, and Jagger Weekly netted the other on a penalty kick. Holden Ginn had two assists and McLain Teague had one.

PCA jumped on top 2-0 in the first 10 minutes of the game and led 3-1 after Harvey’s scored midway through the first half.

Brookhaven roared back, however, taking control of the game and the scoreboard by halftime. Cole Griffin, Harpreet Singh, Logan Murray and Corey Case all scored in the first half to give the Cougars a 4-3 lead at the break.

Brookhaven added goals by Murray and Joseph Blalock before Harvey knocked in a rebound goal to break the string and pull PCA to within 6-4.

Most of the action in the second half took place on PCA’s end of the field, however, and Brookhaven quickly regained the momentum. Carson Rounsaville iced the victory with a goal in the 79th minute.

A handful of local high school football seniors have been selected to represent their region and state in upcoming all-star... read more