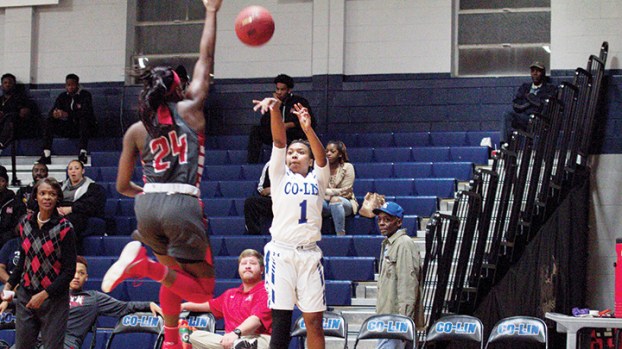 Photo by Natalie Davis, Co-Lin Athletics/Kyeonia Harris, a sophomore from Raymond, knocks down a jumper over a Lady Trojan defender in Monday’s 85-77 win.

The Lady Wolves of Copiah-Lincoln Community College moved to 7-0 on the year with an 85-77 victory over Mississippi Delta Monday night. Sophomores Alexus Holt and Brittany Rose led the Lady Wolves in scoring with 18 points each, while T’kyra Hicks added another 17.

“It seemed like we were sluggish to start with. We just have to execute better and play more solid defense,” said head coach Gwyn Young. “We shot good enough to win and out-rebounded them, but we have to get better.”

Co-Lin pulled out to an eight-point lead midway through the first quarter, but the Lady Trojans fought back with a 16-1 run that gave Delta a 26-19 lead over the Lady Wolves. In the second quarter the Lady Wolves regained composure and slowly began stretching the lead.

Co-Lin entered the locker room at the half leading by seven, 47-40.

Rose and the Lady Wolves held off the Lady Trojans in the final minutes with solid shooting and free throws.

Holt had an impressive game, as she added seven rebounds, four assists and three steals to her 18-point performance. Karry Callahan posted a double-double with 11 points and 10 rebounds. Diamond Smith also had a strong game on the boards with seven rebounds.

The Lady Wolves are back in action Thursday at 6 p.m. as Co-Lin host the Coahoma Community College Lady Tigers in Wesson.