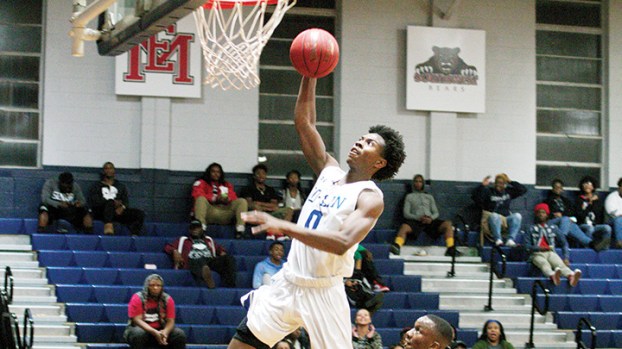 Photo by Natalie Davis, Co-Lin Athletics/Anthony Jones, a sophomore from Wesson, drives to the basket against Mississippi Delta. Jones finished with 12 points and five rebounds.

The Copiah-Lincoln Community College Wolves moved to 6-0 on the season Monday night after an 88-78 win over the Trojans of Mississippi Delta. The loss moved the Trojans to 3-4 on the year. The Wolves shot a blistering 47 percent from the field and 44 percent from three-point range.

“We played our offense tonight, a really unselfish way of playing,” said head coach Kenny Bizot. “We had several players step up for us tonight. Floyd is an incredible player, he is a joy to coach and a great competitor…it was a great game from him, and Wilson did a fantastic job catching with his feet set and shooting the ball.”

Five minutes into the contest, the game was knotted at 10 apiece, but the Wolves began to pull away in the following minutes. Co-Lin went on an 18-2 run and led 33-18 with eight minutes remaining in the opening half. Sophomores Anthony Jones and Darrian Wilson led the first half run.

Co-Lin continued to pour in baskets from all parts of the floor and stretched the lead to 20 in the final five minutes of the half. The Wolves took a 16-point lead into the half.

In the second half the Trojans rallied and went on a 12-5 run, but it was too little, too late, as the Wolves held on to the lead. Jonathan Floyd’s game came to life in the second half as he scored 22 points and was 10-for-10 from the free throw line.

Floyd’s 22 points led Co-Lin in scoring. The sophomore also led the Wolves with eight assists. Darrian Wilson added 17 points and had the hot hand Monday night, going 5-for-6 from three-point range. Youry White continued his dominating play from under the rim as he posted a double-double with 10 points and 11 rebounds. Jones finished with 12 points and five rebounds, and Damarius Brooks netted 10 points.

The Wolves are back in action Thursday at 8 p.m. as Co-Lin hosts the Coahoma Community College Tigers in Wesson.

The Lady Wolves of Copiah-Lincoln Community College moved to 7-0 on the year with an 85-77 victory over Mississippi Delta... read more