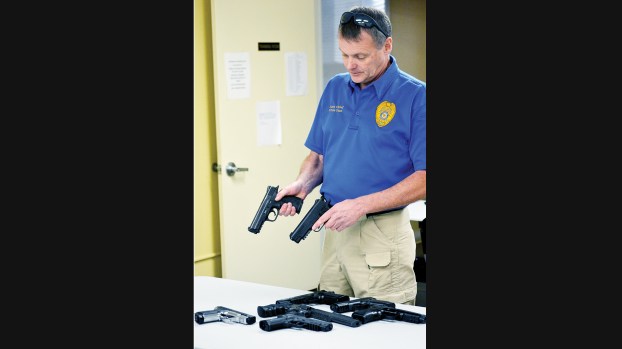 Photo by Donna Campbell/Brookhaven Police Assistant Chief Chris Case displays several toy pistols at the police department, while visually comparing a toy pistol in one hand to a real weapon in his other.

Brookhaven Police Chief: ‘All it takes is one mistake’

Brookhaven Police Chief Kenneth Collins says it’s only by the grace of God that a child or a police officer hasn’t been killed because of a toy gun.

Collins is urging parents not to buy toy guns for their children for Christmas or anytime. Manufacturers have created products that look so real, it’s hard for even adults to tell the difference between a deadly weapon and a toy.

He said younger children could easily mistake a real gun for a play toy, while older juveniles are using the realistic-looking toy guns to intimidate others.

Too often, Brookhaven officers have had to draw their guns on juveniles and even adults who won’t drop the weapon they’re holding, despite police warnings.

“They’ll say, ‘no man, it ain’t real,’ but my officers don’t know that,” Collins said. “It’s only by the grace of God that somebody hasn’t been killed. All is takes is one mistake.”

Officers wear body cameras and the confrontations are recorded, he said.

It’s difficult to tell the difference between toy pistols and real firearms, he said, especially at night. Police dispatchers receive calls daily about someone brandishing a weapon. Just this week, a woman called police to report a teenager waved a gun at her as she drove by but she didn’t know if it was real or not.

Connecticut Sen. Richard Blumenthal is introducing a bill that would force manufacturers to make toy guns more easily recognizable by making the markings permanent. It includes paint ball and other imitation-style firearms. In a statement, the Toy Association said it doesn’t believe the legislation will have a major impact on the toy industry.

Toy guns are federally regulated to include a bright colored plug inserted in the barrel.

The problem is that these plugs can easily be painted over or sanded off, Collins said.

Some of the guns that police have confiscated are CO2 guns sold at retail stores for $20 to $150. Juveniles use them to vandalize buildings and shoot out windows.

A man who shot a teenage driver near Family Dollar in Monticello Tuesday night is expected to have a court... read more