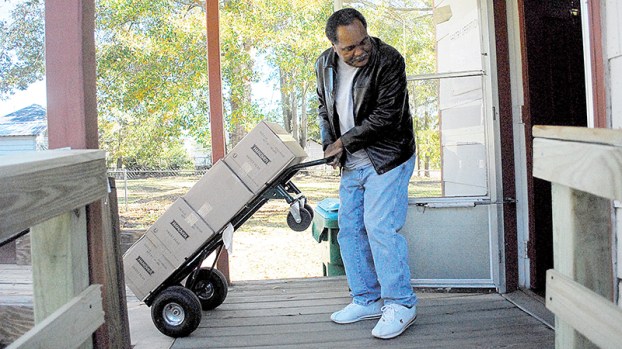 Photo by Trapper Kinchen/Donson Black unloads a stack of donated food into Bethel’s food pantry Tuesday. The pantry serves about 175 families per month, representing about 400 individuals.

Bethel’s pantry operates out of an unassuming white building behind the church’s sanctuary on First Street. Chances are, you might never know it was there if you didn’t know where to look.

But, even though it isn’t the most well-known charity in town, pantry director Stanford Qualls has witnessed a hardy increase in people seeking aid from the food bank in recent years.

As a result, his team has had to work overtime to keep up with local demand.

“The amount of donations have stayed about the same,” he said. “But the number of people receiving donations has actually increased.”

The food pantry serves about 175 families per month, and, according to Qualls, that number represents roughly 400 individuals who receive nourishment through Bethel’s donations every 30 days.

Basic human compassion and kindness lie at the heart of the church’s food mission. Qualls said the pantry was established six years ago in response to an overwhelming outcry from Lincoln County’s underserved.

“There was just a need in the community, and that’s why we opened our doors,” he said.

The church relies heavily on community contributions, and every penny raised goes directly toward stocking the pantry’s shelves.

A board of directors made up of church members, including assistant director Julia Peters, helps Qualls oversee Bethel’s food pantry.

“We also have several people within the community that are not part of our church that help the program,” he said.

Over the years, a steady stream of heartfelt public support has kept the pantry operational, but Qualls said they could always use more help.

“We’re still getting plenty of volunteers, but we could still use more,” he said.

The 14th annual Holiday Food Pantry Drive is a joint effort between Bank of Brookhaven and The Daily Leader.

In the past, individuals have donated more than $10,000 annually in support of the drive.

Supporters have the option of donating anonymously, as a business, as an individual or in honor or memory of someone. The food pantry drive ends Dec. 15.

Contributions are accepted at both The Daily Leader and Bank of Brookhaven. Checks can be made out to Holiday Food Pantry.

Donations can be mailed to P.O. Box 551, Brookhaven, MS 39602, and they will also be accepted at the front desk of the newspaper office. Holiday Food Pantry donations will be published in The Daily Leader as they come in.

Contributions to the Holiday Food Pantry can also be mailed to the bank, given to bank cashiers or donated through the drive-through windows.

The Christmas season has begun, and — to help Lincoln County get into the proper holiday mood — Brookhaven Little... read more