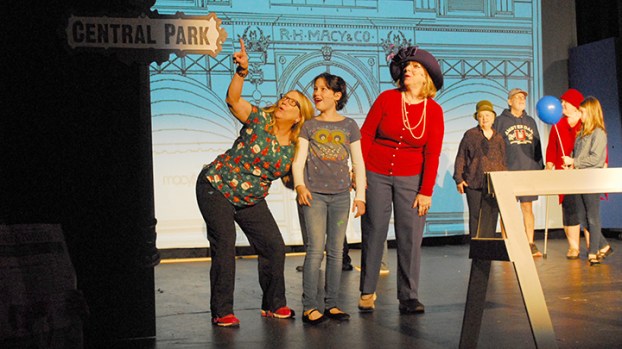 Photo by Trapper Kinchen/BLT cast members rehearse for the upcoming performances of “Miracle on 34th Street” at the Haven. Pictured are, from left: Beth Breland, Eva Mason and Carol Holland Burgess.

The Christmas season has begun, and — to help Lincoln County get into the proper holiday mood — Brookhaven Little Theatre is launching a colossal production of George Seaton’s classic tale “Miracle On 34th Street” at the Haven the first two weekends of December.

The show is based on the Academy Award winning 1947 film of the same name, and it features familiar characters like Mrs. Walker, little Susan and Kris Kringle.

According to BLT’s executive director Emily Waterloo, the play boasts a full cast of 43 performers and integrates several spectacular pieces of music into the storyline.

“Our show follows the traditional plot,” Waterloo said. “There are just musical numbers incorporated into it. It’s actually very interesting.”

First-time director Celeste Lowry helms the show, and her extensive experience in musical theater has proven useful during the rehearsal process.

“Celeste has done a lot with our theatre,” Waterloo said. “She’s very musically talented and has a very strong gift for leadership. She naturally carried her abilities into her directing role.”

Lowry and her team have pulled out all the stops for this year’s production, incorporating several spellbinding elements into an already captivating show. Audiences should expect to see large-scale, Broadway-style dance sequences and vivid set dressings.

“We have a lot of bells and whistles with this show,” Waterloo said. “We even have a small live orchestra that will perform.”

The play is designed to charm people of all ages, and, after the final curtain drops, audience members will get to experience something very special.

“It really doesn’t snow in Brookhaven, but it will snow at the Haven after every show,” Waterloo said.

Waterloo insists the play — which centers on the themes of faith, perseverance and human kindness — will be a compelling representation of the power of Christmas spirit.

“It’s colorful and family friendly,” she said. “Music and Christmas naturally go together. The music in our show helps you feel the emotion in each scene.”

Auditions coming up for “Peter Pan”

“We’re producing the full-length Broadway version,” Waterloo said. “It calls for a variety cast of adults and children.”

BLT is looking for strong lead dancers, acrobatic dancers and acoustic musicians. But everyone over 8-years-old — even individuals without much dance experience — is encouraged to audition.

“Most musicals require you to sing, act and dance,” she said. “But, in this, there are roles for you even if you aren’t a dancer.”

A man charged with murder in a shooting last week turned himself in to Brookhaven police this morning. Justin Anderson... read more