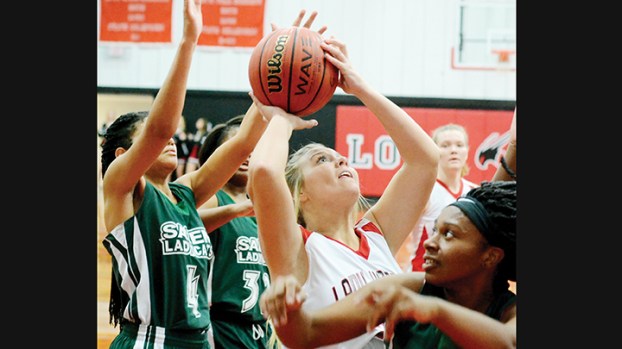 Photo by Adam Northam/Hornets sophomore Taylor Smith fights off most of Salem’s team for a rebound under the basket during Tuesday night’s 50-6 landslide victory for Loyd Star.

Loyd Star Lady Hornets get no trouble from Salem

The Lady Hornets worked over an outmatched Salem squad Tuesday night in a 50-6 victory in which the ball bounced Loyd Star’s way and kept on bouncing.

Loyd Star’s girls came out fast and got almost no opposition from the Wildcats, raining down shots from close range and driving in for uncontested layups to essentially put the game away by the start of the second quarter. Salem’s girls didn’t get on the board until almost five minutes into the game and trailed by 36 points at halftime.

“It’s all about teamwork,” said Loyd Star junior Sarah Britt. “We came out and didn’t want to lose, so we played much better than we did last time against Wesson. I think we can win more games if we work together like we did tonight.”

Britt’s bad memories of the 48-37 loss against the Lady Cobras back on Nov. 17 should be erased after her performance against Salem. She led her team in scoring with 14 points, all of which came from close under the basket after she was able to drive inside time and time again. Six of her points came in Loyd Star’s 26-point opening quarter, when the game was more or less decided, and she spiced up her scoring stats with two each of assists, blocks and steals.

“Fake or drive. More driving,” Britt said. “I learned how to use my body to get them out of the way.”

Sophomore Carly Beth Wallace scored four points on a pair of long-range shots from just inside the arc in the Lady Hornets’ big first quarter, and she was a nightmare on defense, leading the team with eight steals.

“They were mainly playing the point guard, so I just slid down to the corner and no one was there,” Wallace said.

Freshman Calilia Beard, sophomore Malori Cade and sophomore Taylor Smith finished up Loyd Star’s scoring with two points each. All the starters were out of the game by the beginning of the fourth quarter and coach Gene Britt rotated in the bench, getting all 15 girls on the roster playing time.

“The score could have ran on up, but we took the wind out of the game and slowed it down, got all the girls in the game,” Britt said. “You want to let everybody get to play a little bit, and we don’t believe in running the score up on anybody.”

After the Lady Hornets’ 26-point first quarter, the girls scored 14 in the second, eight in the third and only two points in the fourth. Salem was never able to take advantage of the less-experienced players in the game and began rotating in their own reserves late.

In a game that was pretty much over as soon as it started, the most excitement on the court came on the last play of the first half when girls from both teams fought to get in a last-second bucket.

Wildcats freshman Ashanti Tyson got a little frustrated and leveled Loyd Star’s Townsend, sending half of both teams into a wild scramble on the floor as the halftime buzzer sounded. Townsend rolled on the wood in pain, holding her chest, while Tyson jumped up from the floor and the Lady Hornets looked to the impassive referees for a call that never came.

Salem coach Pamela Sumrall grabbed Tyson, shouted, “you punched her,” and led her player by the arm to the Loyd Star bench where an apology was issued. There was never a foul, no one was hurt and the second half played out with no unpleasantness.

Britt said the exchange was no big deal.

“I’m not sure (Tyson) actually threw a punch, she just turned and ran right into (Townsend),” he said.

With the win, Loyd Star improved to 3-4 on the season. They will travel to Franklin County Thursday night, with the girls’ game starting at 6 and the boys’ game immediately following.

Brookhaven Academy is sending a senior football player to an all-star game and a dozen have made the all-district list.... read more