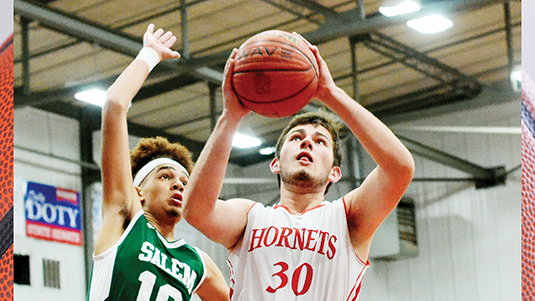 Photo by Adam Northam/Loyd Star junior Gabe Netterville goes up to the basket with Salem junior Hunter Willett in pursuit during the Hornets’ 66-35 victory Tuesday night.

The men of Loyd Star buried the Salem Wildcats under a bucket-load of buckets Tuesday night, winning 66-35 in a game that saw the Hornets’ shooters get hot and stay hot.

Both teams started cautiously, probing each other’s defenses and passing around the perimeter for field goals where possible, but the slow game didn’t last. By the end of the first quarter the tempo was up and both teams were driving hard for the basket, with the full-court confusion benefiting Hornets’ shooters who found openings on the edge and in the lane.

“They weren’t playing us too tight, so you just keep going through the plays,” said Loyd Star junior Dane Smith. “We just kept taking shots and driving up to the goal.”

Smith led the Hornets’ assault, scoring 14 points that included one bomb from the three-point arc and a single free throw, while also making a name for himself in the paint taking on Salem defenders.

“Shooting, driving inside — when one ain’t working you just have to go to the other one. And we can do both,” he said.

Smith also pulled down six defensive rebounds and fed four assists to teammates. One of the hungriest was junior Jett Calcote, who stayed clean, out of the fray and wide open for 14 points of his own.

“Once we got ahead a little bit, I felt like we were doing a good job of making shots and we got a little confidence in us,” he said.

Salem hung with Loyd Star throughout the first quarter, but Smith drove in for a basket and foul, hitting his and-one to give the Hornets a 17-9 lead to start the second quarter. Smith’s attack on the paint seemed to loosen up what had been a tight Salem defense up that point, and the lane was full of Hornets after that.

Smith, Calcote and the Loyd Star shooters caught fire in the second quarter and put up 22 points to Salem’s 10, leading 39-19 at halftime. The Wildcats found a burst of inspiration late in the third quarter, and suddenly a sleepy game was alive and wild with both teams throwing out any semblance of play calling and charging toward the baskets.

Shots dropped, defenders flailed and bodies slid across the polished wood as the referees stood by, keeping their whistles mostly quiet and letting the athletes take over the game. Despite the surge of energy, Salem’s shots didn’t drop and Loyd Star outscored them 16-6 in the third quarter.

Loyd Star’s reserves came in to mop up in the fourth quarter, outscoring the Wildcats 11-10.

“I thought we ran our offense extremely well. We got some good baskets and hit the open man when he was there,” said coach Gene Britt. “Sometimes it’s really hard to get a team back up after the holidays, so I’m real pleased with the way they played.”

The Hornets and their fans love their substitution players — with the game well in-hand, the home section got rowdy in the fourth with reserves on the floor.

Junior Clay Smith, a longtime team manager who is finally in uniform, nailed a three-point shot late in the game to get the entire gym on its feet. The players threw towels and mobbed him post-game, chanting “MVP.”

“It’s just a fun thing. He likes to shoot the three-point shots, and the team tries to encourage him,” Britt said. “He enjoys what he does.”

With the win, Loyd Star improved to 4-3 on the season. They will travel to Franklin County tonight, with the girls’ game starting at 6 and the boys’ game immediately following.

Loyd Star Lady Hornets get no trouble from Salem

The Lady Hornets worked over an outmatched Salem squad Tuesday night in a 50-6 victory in which the ball bounced... read more