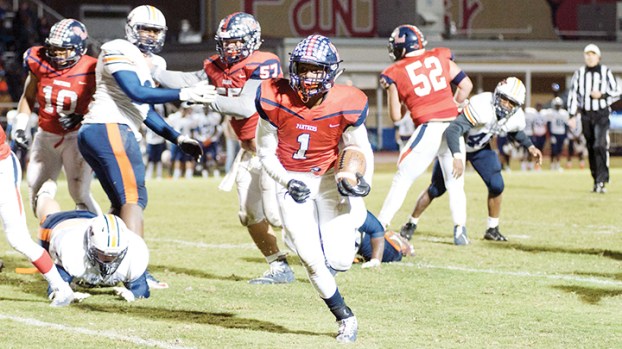 Brookhaven’s Leggett is region MVP, Clopton is coach of the year

The Ole Brook Panthers’ dominant season and playoff run have earned top honors for their workhorse running back, their coaching staff and several players.

Coaches of the eight schools comprising Brookhaven’s Region 3-5A have voted Panthers senior running back Damarrell Leggett as the region’s most valuable offensive player, and head coach Tommy Clopton and his staff are the region’s coach and staff of the year. Several other Brookhaven players were named top performers of the year at their positions, and 13 Panthers were named to the all-region teams.

“He played extremely well for us, especially down the stretch,” Clopton said of Leggett. “As the season went on, he got stronger and stronger. He did a great job for our team.”

Leggett was the heart of Brookhaven’s ground-based offense in 2017, amassing 1,525 yards on 187 carries, a stunning average of 8.2 yards per carry. He also scored 21 touchdowns, had eight games in which he rushed for more than 100 yards and did much of the hard work in the season’s final weeks when his running partner, sophomore J.Q. Edwards, was injured.

Brookhaven’s 11-2 record was the best in Region 3-5A, with the team’s only losses coming in the season’s first game against 6A Pearl and the season’s last game, a heartbreaking, last-second loss to Laurel in the second round of the playoffs.

The 11 wins in between were impressive enough to earn Clopton the region’s coach of the year honors.

“I think any time a coach is selected, first and foremost that tells you they had the blessing of having good players,” Clopton said. “I couldn’t be more grateful for the staff we have. They are a great group of coaches, and they’re a better group of men.”

The honors don’t stop there.

Finally, senior kicker Tyler Mixon was named most outstanding kicker. He was a 60 percent shooter in 2017, hitting 10 of 16 field goals and scoring 94 total points, second only to Leggett.

The all-region teams are also loaded with Panthers.

“Our team was a group of young men who cared about each other and played hard for each other, and because of that they had a lot of success,” Clopton said. “Any time you have a lot of success there will be individuals who are recognized, and you can’t have good individual performances without having a good team around you.”