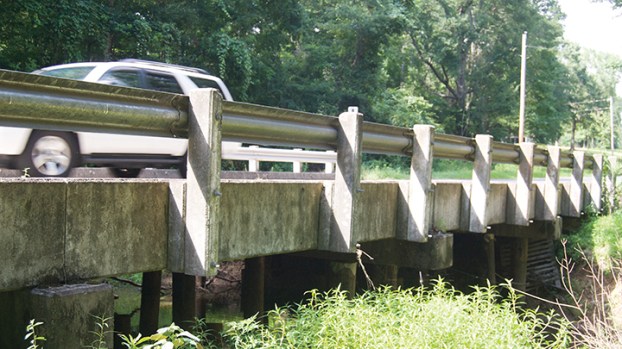 The science of bridge building is sophisticated.

Geotechnical investigations are required to see how much load the earth itself can support. Once that’s figured out, you have to study hydraulics data from the body of water you’re building across to determine flow rates and heights during flood events. Those records can go back a century, and you hope they do, so your calculations are as accurate as possible. There are all sorts of other studies in materials, load-bearing, slopes — engineers undergo extended mathematical training in college, then pass a stringent professional exam and keep their licenses current through continual study for the duration of their professional lives.

But the economics of bridge building are simple.

Grab a tape measure and mark off 100 feet. If you were building a bridge from end to end, you’d have just spent $350,000, or every penny the average Mississippian earns by working a decade.

“The most difficult thing for people to understand is how much it costs to build bridges to a high standard,” said Ryan Holmes, P.E., principal of Dungan Engineering. “When you see how much it costs and multiply that out across the entire county, it’s an eye-popping number.”

As the engineer for Lincoln County, Holmes may be the most pressured bridge overseer in the state. Lincoln County is ranked third in Mississippi in number of bridges with 303, and 108 of those are built on wooden pilings, the state’s second-highest total. Wood-structured bridges have come under intense scrutiny from the U.S. Department of Transportation, which is forcing Mississippi’s state road agencies to inspect them all at great cost and close them if necessary.

The closures have hit Lincoln County hard — so far outside inspectors have closed 14 bridges, with five repaired and the other nine soon to come under contract for repair. But more closures are likely coming, putting Holmes and the supervisors he serves in a tight spot with roads cut in two, the cost of construction materials on the rise and needed sources of funding dried up.

“Right now, we’re dealing with about 25 percent less money available for local bridges,” Holmes said. “Every time the governor has to make a budget cut, that affects how much money we have in our projections for state aid bridges. And there have been three cuts this term.”

Counties are missing the $20 million normally provided every year by the Local System Bridge Replacement and Rehabilitation Program, which the Legislature declined to fund last year. LSBP funds account for $1.9 million of Lincoln County’s four-year bridge maintenance program, or $475,000 per year.

Those figures mean Lincoln County’s missing LSBP funds are spotting the county short one new 100-foot bridge per year, or nearly three rehab projects. Over the four-year term, the missing funds are putting supervisors behind four new bridges or 10 rehabilitations.

“Ever since I’ve been in office, I take the district’s money and put in three or four bridges a year. Just fund the bridges and cut out all this bull,” said District 3 Supervisor Nolan Earl Williamson. “They have to get back to responsibility. Along with the word ‘conservative’ comes responsibility. We’re talking about safety for the people, school buses, ambulances, homeowners and everything.”

Along with LSBP money, counties also receive federal funding, money from the Mississippi Office of State Aid Road Construction and local money generated through taxes. LSBP funds are for bridges on local county roads, while State Aid funds are strictly for roads built to that office’s standards.

Some of the 14 closed bridges have been on State Aid roads. While supervisors can replace their own local bridges at their leisure, State Aid projects require extensive planning, data gathering, right-of-way acquisition and environmental studies, and then completed plans can sit on the books for years before funding and approval are granted.

When inspectors close a State Aid bridge, supervisors are pretty much at the state’s mercy to get it repaired and reopened.

“They worry about everything — which way a frog jumps — instead of getting out there and building a bridge, and then they want four or five acres of right-of-way and you have to talk people out of that,” Williamson said. “As far as building bridges, there ain’t nothing to it. You can pick them things up, add a span or move it a little, put riprap on it and sit it back down. I could put up a three-span bridge in three weeks if I didn’t have to put up with the bull.”

Federal funds are for federal aid routes, several of which are designated in Lincoln County but mostly remain incomplete because of funding shortages (roads that suddenly go from smooth pavement and wide shoulders to slag, such as Jackson-Liberty Road, are an example of this).

Supervisors in October maxed out their local funding options by passing a $5 million bond for road and bridge repairs. They were able to pass the bond without a tax increase by rolling over payments from the now paid-for jail bond, passed in the late 1990s to build the county jail.

But even the bond isn’t enough to keep up with expected bridge closures. Using Holmes’ figures, the $5 million bond is enough to build 14 new bridges or 28 bridge rehabs, but there are more than 90 other wooden bridges in Lincoln County and no one knows how many the inspectors will close.

Fixing them all with local funds is not an option, said Lincoln County Administrator David Fields.

“The simple fact of the matter is it would cost more than we could even burden the taxpayers with if we wanted to,” he said. “I don’t know that $20 million would be enough to replace every wooden bridge out there.”

Supervisors have limited options to stretch their money.

Not every bridge has to be replaced with another bridge — as long as the length of the crossing is short enough and the creek or stream below doesn’t move too much volume of water, supervisors can opt for poured-in-place concrete box culverts. Even smaller crossings can sometimes be rebuilt by laying large pipes in the stream and paving over them. Bridges on small, gravel national forest roads can sometimes be replaced with railroad flatcars, but that is rarely applicable in Lincoln County.

District 2 Supervisor Bobby Watts said he replaced 23 wooden bridges with concrete box culverts during his previous stint in office through 2012. A box culvert is planned for Walley Road in his district that should cost a little less than $200,000.

“I ain’t never had no trouble with them all. I ride on them all the time,” he said. “When you can make it work with a culvert, it’s just a great thing.”

Before 2017, supervisors’ most commonly used money-saving tactic for building bridges was using wooden substructures, but those days are likely gone for good.

The USDOT, which is ultimately responsible for every bridge in the country, funds state transportation departments to inspect and maintain bridges on its behalf. The feds grew suspicious of Mississippi county engineers’ inspections and ratings for wooden bridges earlier this year and decided to randomly inspect more than a dozen bridges around the state with assistance from the Mississippi Department of Transportation.

When most of those bridges failed inspection, the alarm began to sound.

Since then, the USDOT has demanded outside inspections be carried out in order for state agencies to continue receiving federal transportation funds. At the feds’ urging, State Aid contracted with out-of-state engineering firms to inspect wooden bridges statewide for more than $30 million.

At issue is the speed at which wood rots. State Aid standards call for slowly-failing timber bridges to be downgraded over time, with 6,000 pounds being the lowest weight limit and the last stop before a bridge is closed. The USDOT, however, now says a bridge is condemned when a wooden piling reaches 50 percent deterioration.

Local officials are not quite sure how long State Aid and federal standards have been at odds or when either agency began using their formulae. They are also unsure of how the conflict between the feds and Mississippi will be resolved. Several have hinted at politics, hurt feelings and muscle flexing between federal, state and local engineers that has exacerbated the blow-up.

Stuck in the middle are supervisors and the traveling public, and the only way out of the bind is more money.

The Mississippi Association of Supervisors at its midwinter conference in January will likely rally the Legislature for increased fuel taxes to pay for road and bridge construction. The idea has been floated out every legislative session, but the political will to increase taxes has not existed.

“We haven’t raised gas taxes in 31 years, and construction costs have gone up something like 200 percent. We’ve got to have more money,” he said. “To me, the gas tax is the only fair way to get it. If you ride, then you pay. The property owner pays enough taxes as it is — only 40 percent of the people in Lincoln County own property, and it’s just not fair to them.”

Few things have the power to spark a smile during the holidays like colorful decorations, and the Lincoln County Library... read more