Cobras take the sting out of Yellow Jackets, 80-27 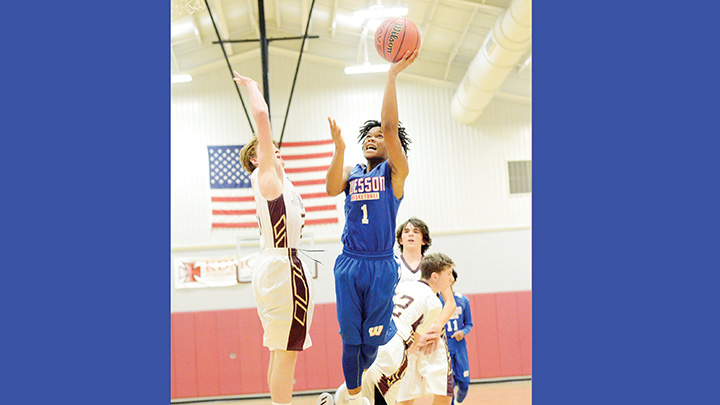 Photo by Adam Northam/Wesson junior Shemar Dickerson gets up high on his way to the rim Thursday night in the Cobras’ complete dismantling of overmatched Enterprise 80-27.

The Wesson Cobras embarrassed Enterprise Thursday night, turning loose a roster of powerful athletes who dominated the Yellow Jackets in an 80-27 victory.

The game was completely out of hand by early in the second quarter, when Wesson stopped cautiously probing the Enterprise defense and began unleashing its horses in a fast-scoring transition game that, once started in motion, pushed on all night as relentless as a Greek phalanx. The Jackets were powerless against it, and continual turnovers led to Wesson players dropping layups at full speed and beating the life out of Enterprise’s game.

“We put a lot of pressure on them, and I think our speed and our depth really killed them,” said Wesson sophomore Kenner Bizot. “Once we got our steals and got the ball in transition, they couldn’t keep up with us. Once you get that first transition basket, it just builds from there into running and running.”

Bizot helped lead the Wesson attack, scoring 13 points in a game in which a dozen members of the Cobras’ 16-man roster scored and all of them got playing time. Junior Shemar Dickerson was Wesson’s top scorer, dropping in 16 points and doing much to break Enterprise’s back early in the game.

The Cobras outscored the Jackets 18-7 in the first quarter, 31-7 in the second, 21-4 in the third and 10-9 in the final quarter, when both teams flooded the floor with bench players.

It was over long before that, as Wesson was up 24-7 with six minutes remaining in the second quarter and leading 40-13 at the half. By the start of the fourth quarter Wesson had scored 70 points and the reserves were rotating in.

“We came out and did what we had to do to get an easy win,” Dickerson said. “We executed on defense and everybody did their part to get steal after steal.”

“We just used our athleticism and speed to take advantage of the situation,” said Wesson coach Rusty Newman. “I’m proud of our guys for playing together to get a good team win. We work on our ball-handling a lot in practice and we stress team play.”

“We knew what Wesson was coming in to this game. Their ability to run kids in and out that are on the same level makes it hard to compete against them,” said Enterprise coach Shane Adams. “Coach Newman has a really good group and I look for them to go far this year.”

Brookhaven’s Leggett is region MVP, Clopton is coach of…