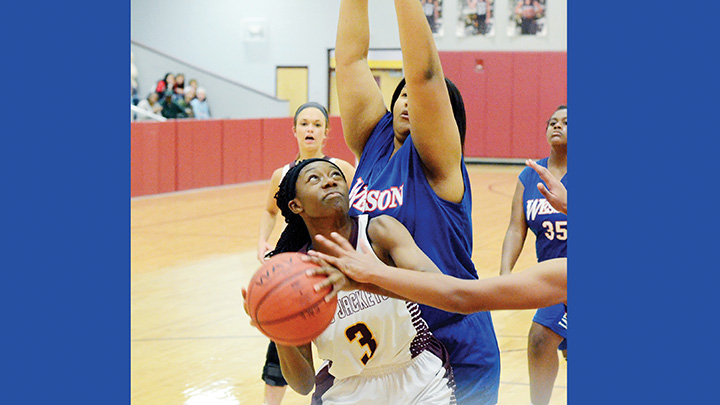 Photo by Adam Northam/Enterprise junior Breyauna Johnson controls the basketball off a rebound and prepares to go up for the game-winning put-back shot against Wesson Thursday night. The Lady Jackets defeated the Lady Cobras 31-29 in the final seconds of play.

A bad bounce for Wesson and good timing by Enterprise gave the Lady Yellow Jackets a 31-29 win over the Lady Cobras Thursday night in a close, defensive game decided in the final 10 seconds.

Clinging to a one-point lead in the game’s final half-minute, the Lady Cobras were running the floor with a chance to put the game out of reach when one of the girls in blue got trapped in the corner at half court and surrendered the basketball to Enterprise senior Monisha Pendleton. Pendleton collected a holding foul trying to break free and hit one of her two free throws to tie the game at 29, and her second, missed shot was put back by junior Breyauna Johnson to give the Jackets the lead — and the win — with seven seconds to go.

“They weren’t really boxing me out that well, so I got the rebound and put it back. It felt good,” Johnson said of her game-winning shot, fired up from right underneath the basket with a den of snakes around her.

The rebound was Johnson’s fourth offensive collection of the game and came at the most opportune of times, but it wouldn’t have happened without Pendleton’s hustle, steal and bad free throw shot.

“It was meant for me to miss that shot so my teammate could get the rebound,” Pendleton said.

The game’s exciting finish was a hard contrast to its humbler beginnings. While both teams scored 13 apiece in the fourth quarter, neither scored more than eight in the first three.

Both Enterprise and Wesson played tight defense and took few chances with the ball on offense early on, resulting in several missed field goals and a halftime score tied up at only 10 points.

Penetration into the paint was tough for either team to come by, though Wesson junior Alissa Coone broke inside for a sweet rainbow and free throw, and Enterprise senior Carlee Nations fed twin sister Jana a fast assist down low for two points.

The frustration of a low-scoring half gnawed at both teams and the third quarter brought a faster, riskier, more physical game, as both teams’ leading ladies threw caution in the trash and began driving on the basket.

Particularly entertaining was the battle between Carlee Nations and Wesson sophomore Shelbi Maxwell, who shadowed each other in the second half and fought hard over loose balls, turning the game into a wrestling match numerous times. The referees let the scrambles go on forever before calling the tie-ups.

Enterprise led 18-16 to start the final quarter, but later a narrow Wesson lead was extended on a three-point shot from Coone with 2:30 remaining in the game. Wesson junior Nekevia Frye blasted inside for a layup to give the snakes a 29-24 lead with one minute remaining and Enterprise looked doomed.

But Pendleton hit a bucket to close the score to 29-26 with 31 seconds to go, and after Wesson failed to score on the ensuing possession, Johnson drove in for a foul and hit both free throws to make it 29-28. The next possession saw the half-court trap and foul, with Pendleton and Johnson finishing off the game for Enterprise.

“I was proud of those suckers for fighting back. They could have laid down but they didn’t,” said Enterprise coach Shane Adams. “For the longest time we couldn’t buy a basket.”

The win keeps the Lady Jackets perfect at 5-0, while the embattled Lady Cobras fall to 1-6 after a solid performance that just went sour at the end.

“Defensively we did a great job not letting them get comfortable with what they wanted to do. But down the stretch the key things got us — fouls, turnovers, missed shots,” said Wesson coach Candice McDuffey. “Once that ads up in the final moments, if can put you on the losing side.”

McDuffey said the game broke for the Lady Cobras late in the fourth when Coone was called for a charging foul, giving Enterprise an extra possession late when the Jackets were trailing.

“(The refs) were constantly calling fouls on us that I felt weren’t there, that we didn’t deserve,” she said. “I felt the pressure, but I was trying to keep calm and play right. But when they called that charge on me, it was over after that.”

Enterprise has two home games coming up next week as part of the Lincoln County Invitational Tournament, hosting Newton Tuesday night and Lawrence County Friday. Wesson is also home next week, taking on Crystal Springs and Franklin County on the same days.

Cobras take the sting out of Yellow Jackets, 80-27