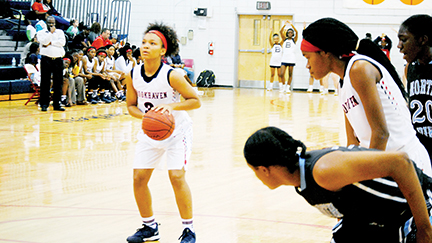 Brookhaven split with North Pike in a home basketball double-header Friday night, with the boys winning a high-scoring battle 86-70 and the girls falling just short, 45-38.

The girls game started with both teams’ defense preventing any score. Two minutes into the game, North Pike got on the board hitting one out of two free throws. The Lady Panthers finally got on the board, as junior Cynphoni Thompson hit a two pointer. North Pike quickly tied the game up at two all and was able to take the lead 3-2 with five minutes left in the first.

It took the Lady Panthers a minute and half to retake the lead, but they were unable to hold it, as the Lady Jaguars went back on top 6-5. The Lady Panthers once again were able to take the lead and began adding to their lead, going up 10-6 with under three minutes left in the first. With just more than two minutes left in the quarter, the Lady Jaguars managed to tie the game 10-all and take a 12-10 lead as time expired.

The Lady Panthers managed to tie the game on the free throw line and once again began building on their lead, going up 16-12 with more than four minutes left before halftime. The Lady Panthers took a 20-14 lead into the locker room.

Both teams’ defenses showed up to start the third period, with no score made until three minutes remained in the quarter with the game tied 22-all. With 2:30 remaining, the Lady Panthers managed to break the tie only to see the Lady Jaguars retake the lead and add onto it, up 28-25 with time running out in the third.

Despite the Lady Panthers outscoring the Lady Jaguars in the final period, North Pike was able to outlast the Brookhaven comeback attempt to win 45-38.

“We played OK, but we struggled at the free throw line right now and it’s causing us to be a little tight. We need to loosen up and get back to the way we play,” Lady Panthers coach Preston Wilson said.

In the boys game, Ole Brook came out on fire, scoring six points before North Pike was able to finally get on the board. Nailing a three pointer, North Pike found themselves leading 9-8 with just over five minutes left in the first. Ole Brook’s offense came to life and was able to retake the lead and build on it, leading 31-20 at the end of the first period.

Ole Brook’s offense continued to stay hot in the second period, as they built a huge lead to take a 53-26 score into halftime. North Pike attempted a comeback in the third period, but Ole Brook’s fast-paced offense proved too much, and Brookhaven led 70-45 going into the final period. Ole Brook’s offense did not let up, adding score after score to take the game 86-70.

“The boys came out hard and everyone got after it,” said Brookhaven coach Marcus Flippin. “The last couple of games I felt like we didn’t put forth the effort on the defensive end. Everyone made the effort tonight to play defense, and played team ball. The win was a team effort.”

Ole Brook junior John Hilbert said it was good to get back to winning basketball after a tough stretch through the end of November.

“We’ve been struggling lately, and we really needed this win. We played together and played hard,” he said.

The Brookhaven Panthers defeated Wesson Friday night in varsity soccer, coming from behind with unanswered goals and solid defense to... read more