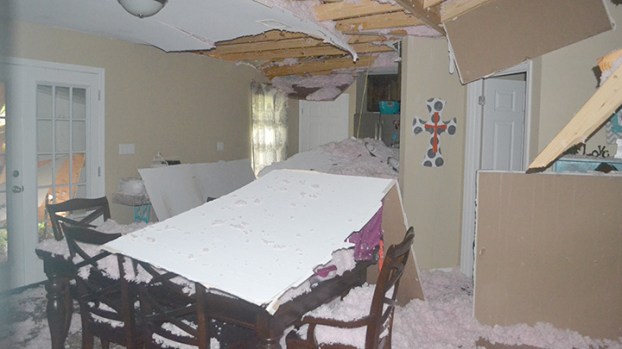 Photo taken by Donna Campbell/Troy Douglas’s home was completely unlivable after six oak trees tore through his roof. Pictured is his damaged dining room after the trees fell.

Nine months after a devastating tornado tore through Brookhaven, something good has emerged from the wreckage.

The storm — which struck early April 1 — had a particularly powerful impact on the family of Troy and Ashley Douglas.

Six large oak trees fell on the roof of their home, nearly crushing one of their children.

“We were literally inches from losing our daughter,” he said.

In the wake of the tempest, the insurance company declared their damaged house a total loss.

Fortunately for the overwhelmed family, the community sprang into action.

“You could not get in or out of our road for the people who had swarmed in looking to help,” Douglas said.

One of those people was Douglas’s friend, Quinn Jordan.

“When I told him we were demolishing the house, he asked if we could work something out to salvage what wasn’t destroyed,” Douglas said.

They struck a deal, and Jordan wound up reclaiming everything in the house that was salvageable. He recovered all of the home’s cabinets and countertops, interior and exterior doors, windows, air conditioning unit, water heater and several light fixtures.

“God allowed something good to come out of something so bad,” Jordan said.

As fate would have it, Jordan’s mother Fay Huff and her husband Ray were in the beginning stages of building a new home in Lincoln County.

Until Douglas gave them a deal on his salvaged furnishings, they weren’t sure if they could afford to finish the project.

“It was just a Godsend,” Jordan said. “The Lord used a trying and emotional time for the Douglases to bless my parents.”

Jordan said the process of salvaging the house was emotionally difficult, because he knew how distressing it was for his friends.

“It was very bittersweet, and Ashley came in when I was in the beginning of the process,” he said. “It just hit me how personal it all was to her.”

Jordan’s parents started building their home in May, and — after a slight delay due to inclement weather — they completed construction in October.

“It was a true family effort, and all seven of our children played a big roll in getting it finished,” Huff said. “The house is a result of many answered prayers.”

The Douglases have not had a chance to see the Huffs’ new home, but they appreciate that a part of their old house has been given fresh life.

The Douglases bought a new house in June, opting not to rebuild.

“Little by little it’s starting to feel like our home,” he said.

According to the National Weather Service Forecast Office in Jackson, more tornadoes have happened in Mississippi in April than any other month.

As the people of Brookhaven know all too well, seasonal weather often makes a dramatic impression on local life.

One thing Douglas learned from his family’s loss is to always be as prepared as possible.

“We keep up with the weather now,” he said, laughing.

An Adams County man was arrested Monday for attempted murder after allegedly beating a child with a baseball bat Saturday... read more