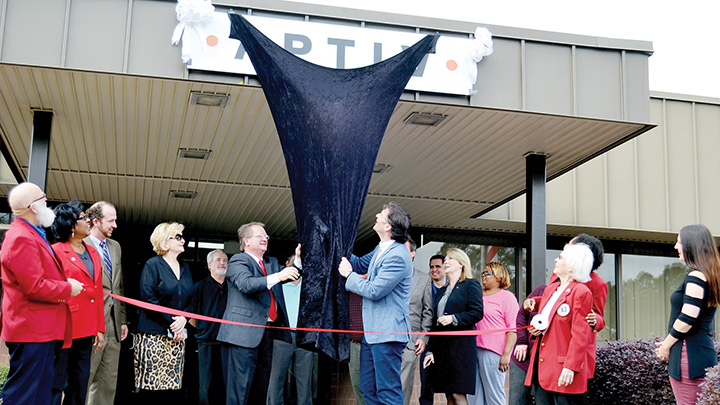 The manager of the Delphi Automotive plant on Industrial Park Road unveiled a new name and a new mission Tuesday, a move that will bring at least 25 to 30 new jobs to Lincoln County.

“Aptiv will be a technology company that develops safer, greener and more connected transportation solutions for a diverse array of global customers,” said Andreas DiVece, who came to the Brookhaven plant from Italy in August.

Aptiv will design and produce electronic systems, advanced safety technology and integrate the hardware and software for self-driving cars. It emerges from the completion of Delphi’s spin-off of its Powertrain segment, which on Tuesday became Delphi Technologies PLC.

The name change came because mobility is changing.

“We want not to just follow the trend, we want to set up the trend. We want to be who is setting up the technology,” DiVece said.

The Brookhaven plant will be the source of software and vehicle architecture expertise that enables the advanced safety, automated driving, user experience and connected services that are enabling the future of mobility, he said.

Some of the clients DiVece expects to serve include Google, Apple and Tesla “with more and more coming,” he said. “This, for Brookhaven, is the right approach for where we want to go.”

Garrick Combs, executive director of the Brookhaven-Lincoln County Chamber of Commerce and the Economic Development Foundation, said the change in name and mission represents a landmark in the corporation’s future in Lincoln County.

“We’re terribly excited about the next 40 years of your growth and being on this side of the technology platform of vehicle automation and the customers that you’ve named, global icons such as Google and Apple,” he said.

Sen. Sally Doty, R-Brookhaven, said Aptiv will be part of the future of automotive manufacturing. She said autonomous cars were a the topic of conversation at several Legislative conferences she’s attended this year.

“I’m excited that part of this is going to be happening right here in Brookhaven and I’m very proud of what you all are going to be doing,” she said.

DiVece addressed some of the 295 employees at the plant and the city and county officials and merchants who attended the announcement.

“We want to make this change and we’re going to make it only with you,” he said. “It’s all about people — Brookhaven and the community here. We’re excited for the future. I’m excited to see how this journey is going forward.”

The company will formally unveil its portfolio of new mobility solutions at the Consumer Electronics Show in January in Las Vegas.

Brookhaven’s Delphi plant has been in operation since 1977. In 2011, it was announced that the company would invest approximately $15 million into the Brookhaven plant to facilitate production of upgraded circuit boards for General Motor’s full size truck line.