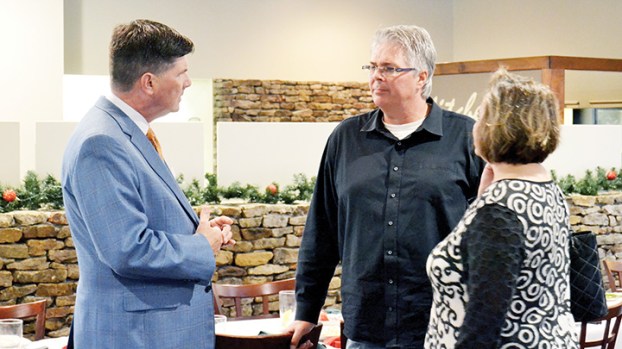 Photo by Donna Campbell/State auditor Stacey Pickering speaks with some of his constituents Tuesday at Mitchell’s Catering for the Lincoln County Republican Women’s third annual holiday luncheon. Pictured are, from left: Pickering and Eric and Tanza Brown.

At a holiday luncheon for the Lincoln County Republican Women Tuesday, the state’s auditor segued from President Trump’s expected visit to Jackson to open two world-class museums this weekend to Mississippi’s checkbook, yet still managed to work Kermit the Frog, Darth Vader and God into the conversation.

Stacey Pickering said he won’t be able to attend the openings of the Museum of Mississippi History and the Mississippi Civil Rights Museum but it was “a very good likelihood” that Trump will be there.

Since Pickering will be in Atlanta, Georgia, celebrating his in-laws’ 50th wedding anniversary, he and his staff were invited to tour the two museums early. He was thoroughly impressed by the facilities and collections of history.

“These are world-class museums,” he said. “They are great tourist attractions.”

Pickering ran through a list of accomplishments claimed by Mississippians whose stories are included in the history museum as well as those whose names are not always synonymous with their home state like Jim Henson, James Earl Jones and Morgan Freeman who were famous for “The Muppet Show,” “Star Wars” and “Bruce Almighty” respectively.

He also talked about the Civil Rights Museum.

“Now they’ve got a place down the street where they can go see our history — the good history and the bad history,” he said. “The Civil Rights Museum tells a very poignant, very difficult real part of our history that we need to — I won’t say be comfortable with — but to know.

“Mississippi’s got great history and we have great stories to tell, but part of my issue and my feeling of uncomfortableness is where are we going as a state. Who are we becoming?”

Pickering said around 54 percent to 56 percent of the state budget is earmarked for education, K-12 and higher.

“If you want to find out where a man’s priorities are, get his checkbook. Where does he spend his money? Well, this is our state’s checkbook. And our priority is K-12. We should never apologize for it,” he said.

He questioned the national ranking — the fact that Mississippi is regularly ranked by many on the bottom in education.

“We’ve got to do a better job,” he said. “It’s not spending. We’re spending all the money we can. The pie, our state budget, is only going to be so large, and we’re already spending almost 50 percent of our budget on K-12. So what we need to do is figure out how do it better with better accountability.

“We’ve got to figure out better flexibility, better freedoms and better accountability for our principals and our school teachers to actually teach and get the bureaucracy off their shoulders and change the future for our children so that the next 100 years will be a better, brighter future for them and for our state.”

The state’s second spending priority is Medicaid and the third is higher learning, “which means more than 75 percent of the budget is spent on the future,” he said.

“Our future looks bright as a state. We’ve got a great history and a great legacy. It’s colorful. There’s good, there’s bad, there’s ugly — but I believe our future is bright,” Pickering said.

The manager of the Delphi Automotive plant on Industrial Park Road unveiled a new name and a new mission Tuesday,... read more