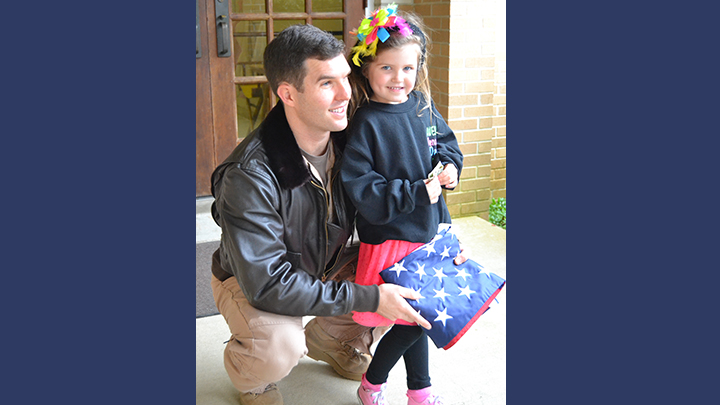 Photo by Donna Campbell/U.S. Navy Lt. Collins Case surprised his daughter Lillie Thursday at her kindergarten class. Case has been deployed in Operation Inherent Resolve and has been away from home for four months.

Lillie Case had been busy jingling bells with her class when her teacher informed them that Lillie had a visitor. In walked her daddy and the youngster’s grin said it all.

“I was excited,” she said later, still holding on to her dad’s leather jacket.

Case, the son of Richard and Beverly Case of Brookhaven, is a Navy flight officer who directs and executes intelligence, surveillance and reconnaissance missions worldwide.

He mostly does that from an EP-3 ARIES — Airborne Reconnaissance Integrated Electronic System — and the P-3C Orion.

Case returned to his hometown Thursday to see his wife, Lauren, and daughters Lillie and 2-year-old Mae. This was his seventh deployment oversees. Most of his time in the U.S. Central Command has been spent flying over Iraq, Afghanistan, the Arabian Gulf and off the Horn of Africa. Other deployments include South America missions, as well as the South China Sea, East China Sea, Philippine Sea and the Korean Peninsula.

He is returning from the Incirlik Air Base in Turkey where he flew on missions in support of Operation Inherent Resolve.

“We’re trying to combat ISIS along the Euphrates River Valley,” he told The Daily Leader.

He worded it a little different for the class of about 30 4-year-olds.

“We fly around all over and look for bad guys,” he said.

Case pulled out a bank envelope filled with dollar bills and gave one to everyone in the class who has had a birthday in the past 12 months. As tiny hands gripped the bills, Case asked them if they knew whose face was on the currency.

“George Washington,” they shouted in unison.

Case shared the story of the first president and Betsy Ross and how the American flag became so important to the United States before presenting the class with a flag he brought back with him from his deployment.

“It flew over Iraq and Syria on Thanksgiving Day,” he said.

The Cases live in Washington, where Case is stationed at Naval Air Station Whidbey Island. But during his deployment, his wife and daughters have been staying in Brookhaven with her parents, Glyn and Tawanda Smith.

Mae Case has been in a body cast following surgical treatments for congenital development dysplasia of the hips. She just got out of it a month ago, he said.

Case hopes to visit with family a bit and then head to Washington this weekend, where he’ll be flying in training missions over Puget Sound. He is excited to be able to love on his girls until it’s time to leave again. He’ll deploy for Japan in April.

“It’s hard to be a part of your family’s life over the phone,” he said. “I’m looking forward to getting back to being a part of their daily lives.”

Holiday Food Pantry Drive is in need of donations;…