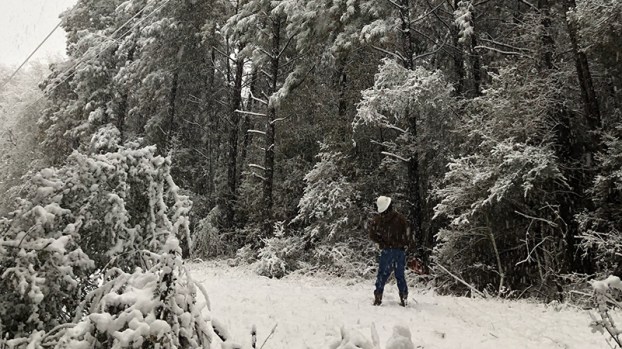 Daily Leader/A lineman works Friday morning to help restore power to one of the many sections of Lincoln County that lost electrical service as a result of the storm overnight.

Several inches of snow blanketed Lincoln County and surrounding areas Friday morning, and though it was expected to melt into hazardous slush by nightfall, snowmen still stood into the night.

For many, the December snow was an adventure — as city, county and private schools closed for the day — but for thousands of others who spent Friday night without power, it was chilly reminder of how cold it can get in Southwest Mississippi.

“We’ll continue working tonight on restoration, but the majority of these outages will be restored tomorrow,” he said.

Brock Williamson, spokesman for Southern Pine, said more than 23,500 customers in their service area were without power at the peak of the snowstorm, but it was down to 14,500 customers Friday night. Southern Pine also serves portions of Lawrence and Copiah county.

“This is one of the worst storms we’ve had within our service territory, so it will be a day or two before we can complete all outages,” Williamson said. “Making it more difficult is the fact that it’s snow which accumulated on trees causing them to snap and hit our lines. Our crews are working non-stop though.”

Deb McGee, spokeswoman for Southwest Mississippi EPA, said 6,500 customers in the nine counties they serve were without power Friday, but those numbers steadily decreased throughout the day.

By nightfall, only 1,401 customers in eight of the counties were without service, including 293 in Lincoln County, 53 in Copiah County and 153 in Franklin County.

“We anticipate restoring power to all members by 3 p.m. Saturday,” she said.

McGee said crews from other cooperatives, Central Electric in Carthage and Twin County Electric in Hollandale, as well as a contract crew were assisting Southwest.

Lucy Shell with Magnolia Electric said more than 100 crewmen were in the field working to get power restored Friday night.

Aaron Achord, manager of engineering and operations, said the crews planned to work late into the night Friday, but several customers would not get power restored until today.

“We regret the inconvenience this is causing, however, the men will need to go home at some point to rest,” Shell said.

She said crews will return to the job early today.

More than 12,750 customers were affected at the peak of the storm. By Friday night, nearly 3,000 were still without power in Lincoln County, 277 in Franklin County and 615 in Lawrence County, she said.

“We have been having problems with getting lines energized and then having a tree or tree limb knock it back out, so our numbers have not been going down very fast,” she said.

The amount of snow that fell caused limbs to crash from the weight as the powder accumulated on branches.

A trained weather spotter for the National Weather Service in Jackson reported 6 inches on Hwy. 51 north of Brookhaven, said meteorologist Anna Wolverton. She said 4 to 6 inches fell from Thursday night to Friday morning.

“It’s a little early,” she said. “The majority of our snowfalls happen in January and February, but December snowfalls do happen.”

Wolverton doesn’t know if the snowfall in Brookhaven set records. She couldn’t find anything in her search for Ole Brook. However, she noted that Meadeville saw a one-day high of 3.8 inches Feb. 12, 2010, and Crystal Springs reported a one-day high of 11 inches back on Jan. 28, 1904.

“There’s no record available for Brookhaven,” she said.

Wolverton said Lincoln Countians can thank the cold front that came in Wednesday for the drifts blanketing the area Friday.

“It kept pushing colder air into the area from Canada, pushing it further south,” she said. “When that cold air came in, it was cold enough for the cold air to transition that rain to snow.”

Wolverton said temps will warm up today to around 50, with lows tonight and Sunday in the mid-20s.

But no rain is expected.

“It’s finally kicking out of here and we’re going to be dry for a while,” she said.

Despite the snow and ice, law enforcement said they saw few crashes Friday.

Brookhaven Police Chief Kenneth Collins warned motorists to slow down and be careful of black ice, a thin coating of glaze ice found on roads. It’s transparent, allowing the blacktop to be seen through it.

“Black ice is real dangerous,” he said. “Slow down and be careful. We’ve been blessed. We haven’t had a lot of accidents.”

Lincoln County Sheriff Steve Rushing said few accidents were reported and none with major injuries. A few vehicles were reported to have slid off the roadways into ditches.

Cpl. Brandon Fortenberry with the Mississippi Highway Patrol reported the same with I-55. Most of the calls Friday were for vehicles that slid off into the median and off sides of the road.

The chairman of the Mississippi Democratic Party won’t be at today’s opening of the history and civil rights museums in... read more