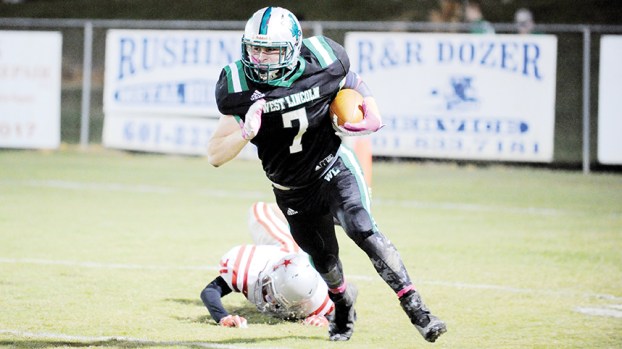 Photo by Teresa Allred/West Lincoln’s Chase Owen is one of nine area football players to be named to the 2017 Mississippi High School Football Coaches All-State Team. Pictured is Owen (7) running back an interception he made as a defender for the Bears in the final play of a game this season against the Loyd Star Hornets.

Football coaches across Mississippi have put together their 2017 dream team, and several local football players made the cut.

“Making all-state is a goal I’ve always had,” said Owen, who is considering a scholarship offer to play football for Hinds Community College. “I’ve always looked up to the players who’ve made all-state, and when I didn’t make it before it made me want to work even harder.”

Owen worked very hard indeed in 2017, serving as West Lincoln’s battering ram in the run game, its deep threat in the passing game and its quarterback in special circumstances.

He carried the ball 102 times for 668 yards, moving along at 6.5 yards per carry and scored 11 rushing touchdowns. In the air, Owen hauled down 34 catches for 628 yards, for a big 18.5 yards per catch. He caught five touchdown passes and threw another six when he was in at quarterback.

For Loyd Star’s Hester, being named an all-state player brought loneliness along with honor.

“I just wish more brothers from my team could have been named all-state with me,” he said.

Hester played center for Loyd Star, serving as the keystone for an offensive line that cleared the way for more than 2,500 rushing yards and 32 rushing touchdowns in 2017. He recorded 28 pancake blocks on the season.

Standing only 5 feet 8 inches tall, Hester did his damage as the smallest man on the line.

“I may not be the biggest or the baddest, but I knew I could be the toughest,” he said. “When you play center it’s a responsible role — if anyone has to take a bullet, it should be you.”

The Ole Brook Panthers’ six selections to the all-state team come at the end of a season of victories, major college football commitments and numerous awards and honors.

“Individual awards are always a reflection of how good a team you have,” said BHS coach Tommy Clopton. “Those young men selected for all-state played a huge role in the success of our team and I couldn’t be more proud of how they played the game and how they’ve grown.”