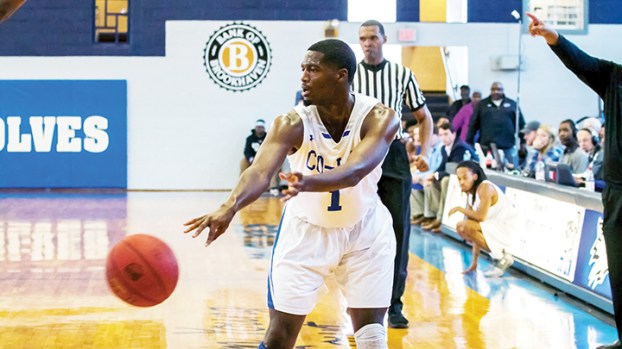 Co-Lin Wolves improve to 8-1 with win over Delgado

The Copiah-Lincoln Community College Wolves outlasted the Delgado Dolphins on Saturday with a 73-68 win.

The win moves Co-Lin to 8-1 on the season and wraps up first semester action. The victory is the second over Delgado on the season, as the Wolves defeated the Dolphins in New Orleans 71-69 in November.

“I’m proud of our guys. It was a tough week with exams and coming off a loss to Jones, so it’s a good win for us,” said head coach Kenny Bizot. “Our guards were able to get in there and get rebounds for us today and that was huge for us.”

Action was very physical and back-and-forth in the early minutes of the contest.

Five minutes into the game, the Wolves went on a 7-2 run and took a five-point lead. The Dolphins fought back and rallied off a 6-2 run of their own and tied the game at 23 each with about eight minutes left in the first half. The game was tied five more times in the final seven minutes and the teams entered the locker rooms tied at 38.

In the second half the Wolves came out firing and went on a 15-4 run in the first five minutes of play. Once again the Dolphins stuck around and cut into the Wolves’ lead, bringing the score within two points midway through the first half.

With 6:38 remaining the contest the Dolphins tied the game for the tenth time at 56-all. Co-Lin was clutch at the free throw line over the next four minutes, going six-for-six. The free throws and a big three-pointer from Miles Daniels gave the Wolves a six-point lead with just three minutes left in the game. Co-Lin locked down on defense and held Delgado over the final minutes to secure the win.

Daarius Brooks and Jonathan Floyd led the Wolves in scoring with 17 points each. Brooks also led the team with 10 rebounds, three assists, and four steals. Mike McWilliams added 13 points and six rebounds, and Daniels netted 10 points and brought down seven rebounds off the bench.

The Wolves are back in action Jan. 8 at 6 p.m. as Co-Lin hosts Taylormade Academy in Mullen Gymnasium.

Lincoln County’s Quinn Jordan got his 2017 deer season off to a good start with this 233-pounder, whose antlers scored... read more