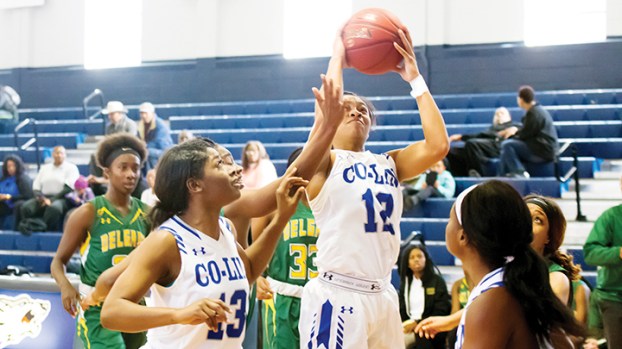 The Lady Wolves of Copiah-Lincoln Community College did not miss a beat Saturday afternoon as they defeated Delgado 99-53.

The win gives the Lady Wolves a 9-1 record on the year and was the team’s last game of the first semester.

“Our bench did great for us tonight, and the deeper your bench is in the league the better,” said volunteer assistant coach Lane Young. “We were very intense today and it paid off. We think we’re a top four team in the South Division and we’re looking forward to improving going into the next semester.”

The Lady Wolves set the tone of the contest early on Saturday with a 12-2 run in the first three minutes of play. Co-Lin continued to stretch that lead in the opening quarter and led 31-7 going into the second.

The explosive offensive play slowed in the second, but the Lady Wolves sustained the 20-point lead for the quarter and took a 50-27 lead into the half.

In the third quarter the Lady Wolves continued to win in all facets of the game. Co-Lin rattled home 30 points and held the Lady Dolphins to just 12. Going into the fourth, the Lady Wolves led 80-39.

The fourth quarter was much of the same as the Lady Wolves secured the win.

Alexus Holt, a sophomore from Epps, Louisiana, led the Lady Wolves with 20 points after shooting 8-for-13 from the floor. Brittany Rose added 14 points, and Ciara Norwood netted 13 off the bench. Karry Callahan led the Lady Wolves on the boards with 10 rebounds, and Rose led Co-Lin with five assists.

The Lady Wolves are back in action Jan. 11 at 5:30 p.m. as Co-Lin travels to Perkinston to take on Mississippi Gulf Coast.

Co-Lin Wolves improve to 8-1 with win over Delgado