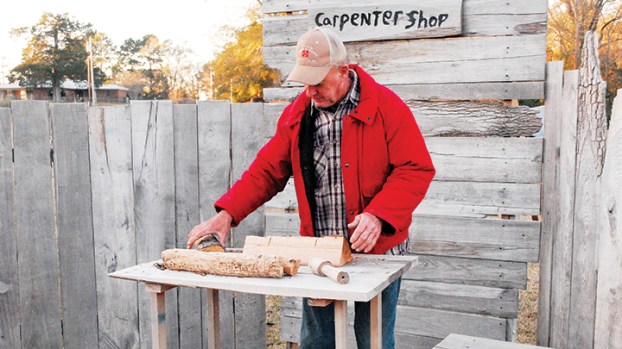 Photo by Trapper Kinchen/Carroll Montgomery works on some of the sets at the drive-through nativity at New Sight Baptist Church. The 14th annual nativity will be open Friday-Sunday from 6-8:30 p.m.

It’s called a nativity scene, and there is one, but visitors to New Sight Baptist Church’s annual Christmas village will see more than just a savior in a stable.

Organizer Brenda Foster said church members try to add to the village, which — after 14 years — wraps around the church. Stations along the way allow motorists to see a drive-by view of Jesus’ life from the angel Gabriel foretelling Christ’s birth to Mary through his resurrection at Calvary.

The nativity will be open Friday-Sunday from 6-8:30 p.m. at the church. The theme this year is “A Baby Changes Everything.”

New this year is the Lord’s Supper. Foster said it was added because it’s an important moment in history.

“That was his last supper before he went to the cross,” she said. “It’s an important scene that shouldn’t be left out.”

Foster said all of the scenes the church recreates are important because people focus most on Jesus’ birth at Christmas. There’s so much more, she said.

“Besides the birth of Jesus, we want to let you know you do have hope because of what Jesus Christ did on the cross. He died and rose again for our sins,” she said. “We want people to know there is hope with Jesus Christ. We put it out there for the communities.”

Viewers can drive through the scenes and see the whole thing in about 20 minutes, though Foster said visitors are welcome to get out and ask questions.

More than 2,500 people were part of the three-night procession that circles the church grounds last year. Five years ago, only about 800 people came through, she said.

“You see it growing and growing. That’s a blessing to see that the world is changing and knowing what the real meaning of Christmas is,” Foster said. “A lot of people have just made that a tradition for their family at Christmastime. It’s fun to watch the kids hanging out of the sunroofs. They’ll point and say, ‘There’s Jesus.’”

For the record, there are two Jesus-es in separate scenes — three if you count the baby Jesus in the manger, but he’s a doll.

About 130 people including the 70 cast members are part of the program which also includes live animals. They’ll have llamas, two donkeys, sheep, goats and chickens, she said.

Foster said that it’s a joy  to be part of the blessing to the community. She may be slowing down, but she’s not ready to quit helping put it together.

“I’ll be helping until the Lord says ‘OK, you can’t do this anymore. I’ll be out there on crutches if I have to,” she said.

St. Vincent de Paul gives to those in need

Saint Francis of Assisi is famous for his Christ-like, charitable verve, and the Brookhaven church that bears his name is... read more