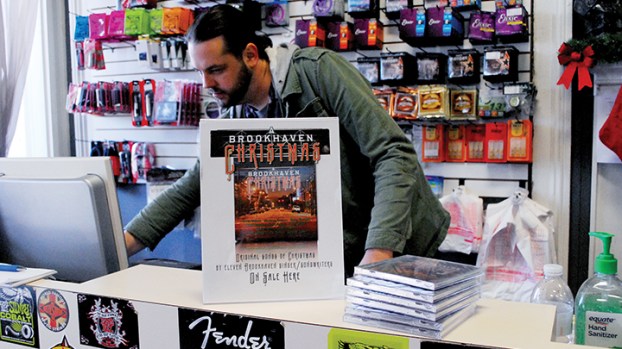 Brookhaven musicians Shaw Furlow and Tyler Bridge came up with the idea to produce a fundraising holiday album during a casual meeting in February. Ten months later, after much hard work and collaboration, their vision has been realized.

“Tyler and I started kicking the idea around,” Furlow said. “And we’re the ones who ultimately produced the album.”

The artistic process through which the CD — entitled “A Brookhaven Christmas” — was produced proved to be an interesting challenge.

The two men commissioned nine of their favorite performers to write and record original holiday melodies, and a creative odyssey quickly ensued.

“When we had our first meeting, only two or three people had Christmas songs already written,” Furlow said.

He said the resulting group effort is a fusion of passion, dedication and artistry.

“Everybody donated their own songs, time and money to do this thing,” he said. “Each artist was responsible for recording their own tune.”

“They’re all very good musicians, and this wasn’t anybody’s first attempt at song writing,” he said.

“A Brookhaven Christmas” was ultimately designed with charity in mind. Furlow and Bridge are donating the album’s proceeds to the Mississippi School of the Arts.

“The School of the Arts has been very successful as long as it’s been there,” Furlow said. “But, this year, they got a massive budget cut.”

The two men are dedicated to bolstering MSA’s creative endeavors, because they care deeply about the cultivation of local artistry.

“We’ve been trying to develop the music scene here for about five or six years now, and it’s starting to work,” Furlow said. “So, we wanted to give back.”

Both Furlow and Bridge are so pleased with how their album has turned out that they can’t stop listening to the music.

“I think it’s great, I really do,” Furlow said. “And I’ve probably listened to it more than anybody else, outside of Tyler.”

He said “A Brookhaven Christmas” features an eclectic mash up of melodic styles, and the album makes for a captivating listening experience.

“It’s really a variety of music,” Furlow said. “We’re talking about everything from blues to Christian contemporary. The songs are as varied as the artists who wrote them.”

Hard copies of the CD are available at Bank of Brookhaven, Bertha’s Flowers and Gifts, Boerner Law Firm, Brookhaven Law Firm, Brookhaven Music and Sound, Engravables, Castles, Expectations, Southern Flaunt, We Frame It and the Mississippi School of the Arts. Furlow said the album should also be digitally available before the end of the holiday season.

They cost $15 apiece, and can also be ordered by mail. Just send $18 to Don Jacobs at 6213 Northlake Circle in Jackson to receive a copy through the post.

“This album is like a box of chocolates,” Furlow said. “Not only don’t you know what you’re going to get when you sample each song, but it’s also really good.”

Randy Pickett is a 63-year-old veteran, an energetic grandfather and a man worth getting to know. When he was growing... read more