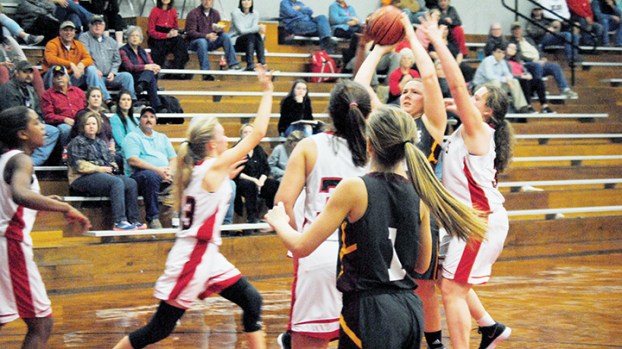 The game was all Lady Hornets from the start, with the younger girls building up a 15-2 lead by the end of the first quarter and almost doubling up in the second for a 27-9 lead at the half.

The Lady Jackets tried to find some life in the third quarter, but Loyd Star beat back their attempt with rebounds and steals to take a 38-14 lead into the final period. The final quarter was all defense until the clock read 4:34, but it was Loyd Star that got the basket. Enterprise played well in the final period, but it wasn’t enough.

Enterprise’s junior varsity team fared a little bit better than the junior high team, but not enough to win. The older Hornets took down the older Jackets in a 14-12 defensive struggle.

Loyd Star scored first, but Enterprise nailed a three pointer to take the lead. Loyd Star’s defense quickly regained the lead, 4-3, with ten minutes remaining in the half. Nailing a three-pointer, Enterprise was able to once again take the lead away from Loyd Star. With under four minutes remaining in the half,  Loyd Star managed to tie up the game. Despite Loyd Star getting into foul trouble, as time was clicking away, Enterprise was unable to capitalize on the free throw line. Loyd Star took a 10-6 lead to half.

Just like their counterparts’ game, neither team scored during the opening minutes of the second half. Five minutes passed before Enterprise broke up the scoreless half, hitting a two-pointer, and found themselves down 10-8. Both teams were in foul trouble as the game went on. Loyd Star managed to outlast Enterprise to win by a final score of 14-12.