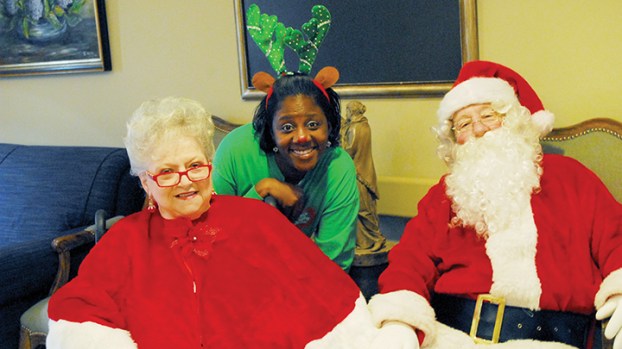 Photo by Trapper Kinchen/St. Nick and Mrs. Claus didn’t have to travel far to visit the residents at the Silver Cross Health and Rehabilitation Center Christmas party Friday. They live there. Pictured are, from left: Barbara Case, activities director Kimberly Williams and Ralph Case.

With all the joy that circulates through the month of December, Kimberly Williams looks forward to Christmas all year long.

She is the director of activities at Silver Cross Health and Rehabilitation Center, and, thanks to a little help from Ralph and Barbara Case, Williams has made this holiday a very special one for many of her patients.

“Residents say Silver Cross isn’t like a nursing home,” she said. “It’s more like their home, especially at Christmastime.”

Every year, Silver Cross throws a glittering holiday party for its residents. Williams said the event usually turns out to be a wonderfully animated occasion with live music, lots of food and droves of visiting family members.

“The families don’t have to bring anything but a gift for their resident,” Williams said. “Everybody eats, mingles and goes down the halls to look at the door decorations.”

This year’s gathering was particularly lively thanks to a special appearance by Mr. and Mrs. Claus — a.ka. the Cases.

For over half a decade, the Cases have dressed up as the famous couple from the North Pole and visited local schools, churches and nursing homes.

“The older people actually enjoy it better than the kids,” she said.

They began their holiday crusade several years ago, after coming across an inexpensive Santa suit at Dirt Cheap. They bought it for him, and she stitched herself a corresponding Mrs. Claus ensemble.

From the moment they first slipped into their cherry-colored, velveteen costumes, the Cases knew they would spend every Christmas from then onward spreading yuletide bliss.

“One time,” Case said. “We went into a lady’s room — she was 100-years-old — and the nurse patted her on the shoulder. She looked up, hero eyes widened and she said ‘Santa Claus.’ She was so overwhelmed with happiness.”

Williams decided to ask the Cases to perform at this year’s Silver Cross party after Barbara Case came to the facility as a temporary resident.

“After getting to know her, I just had to ask her to be Mrs. Claus,” Williams said.

Case immediately agreed and promptly convinced her husband to join in the fun.

“We like to go down the halls and go into the rooms of those who can’t get up,” he said. “It’s really something to see how happy it makes them.”

The Christmas party is only one of many events Silver Cross holds for its residents throughout the year. Williams said her ultimate goal is to give her patients something worthwhile to look forward to.

“The quality of our residents’ lives means a whole lot to us,” she said.

Meanwhile, when all is said and done, Barbara Case absolutely loves being married to Santa Claus.

“With him around, Christmas comes every day,” she said.

The Centers for Disease Control recently published statistics indicating that Mississippi — along with several other southeastern states — is... read more