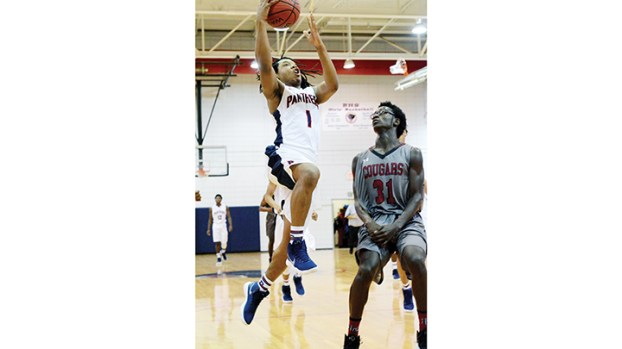 Brookhaven Panthers double up on the Lawrence County Cougars, 57-28

Like a cat playing with his prey, Brookhaven’s Panthers batted Lawrence County around Friday night, getting in a bit of sport in the game’s final, useless minutes before winning 57-28.

With Ole Brook sitting on a 20-point lead and four minutes remaining in the game, reserve players from both benches slowly leaked onto the court and turned the contest into a street-rules, shirts-versus-skins affair of fast attacks that drew no fouls and few points. The Brookhaven guys did manage to drop in a few wide-open layups for the cheering home crowd, which was happy to see their cats avenge an ugly 53-29 loss to the Cougars on their court last month.

“We felt disrespected, so we came with a different mindset this time. We didn’t come to joke tonight,” said Ole Brook senior Richard Marshall.

The joke was over pretty early.

Lawrence County’s last chance was probably at the start of the second quarter, when they trailed Brookhaven 13-9, but by the time the half ended the Panthers were up 21-13. Even worse, Cougars’ senior leader Reggie Statham hit the back wall hard after a failed layup at the halftime buzzer and had to be helped into the locker room. He returned to the bench dehydrated and sore and did not get back on the court.

It’s uncertain if Statham could have slowed down the Panthers, who pushed their point total into the 30s by the start of the fourth quarter and kept on going. Ole Brook scored 16 points in the third quarter and 20 in the fourth, while Lawrence County never broke double digits in any quarter.

“We felt like we had to get them back,” said Panthers junior Lafollette Bogan. “We just went out there and executed our game and played for each other.”

Brookhaven coach Marcus Flippin said his team is deeper now than it was against Lawrence County in November. Athletes from the football team are now transitioned over completely and in good shape for basketball, so more Panthers are rotating into the game.

“Last time we played Lawrence County, they didn’t have any structure. Now they’ve had four weeks of practice, four weeks of understanding,” he said. “They’re starting to figure out what we’re doing and it’s making a difference.”

Defense made a difference, too. The Cougars seemed to get good penetration and get into position for shots all night, but the ball just didn’t roll — partly due to bad luck, and partly because Panther hands were all over the ball.

“We had some chip-in shots that just didn’t fall,” said Lawrence County coach Pat Bridges. “When that doesn’t happen, you have to play defense. We didn’t do either one.”

Marshall led the Panthers in scoring with 16 points, including two from the three-point arc. Bogan was next with 10 points.

Statham hit a pair of free throws for two points before leaving the game with an injury. Bridges said his senior point guard was fine and will return to action next game.

The win takes Brookhaven to 6-5 on the season, with games tonight at Loyd Star and home against Warren Central Friday night.

The Lady Bears of West Lincoln got stingy with the rebounds and broke out a fast-paced offense to overwhelm Wesson’s... read more