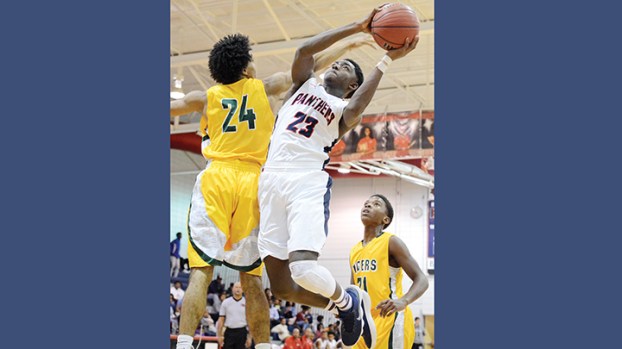 Brookhaven nursed a seven- or eight-point lead through most of the game against McComb Saturday night, maintaining just enough distance to make a late Tigers’ rally fall short in a 55-51 Panthers’ victory.

The Tigers turned on their full-court defense and managed to get within five points of the Panthers, trailing 48-43 with 3:20 remaining in the game, but that was as close as they got. Brookhaven answered by holding the ball on offense and draining the clock until McComb had to start fouling in the game’s final minute.

Rebounding was good — the Panthers grabbed 38 total boards and only turned it over 13 times. Team play was also strong with a dozen assists. Most importantly, nine players got time on the court and eight of them contributed points.

Shooting was only 38 percent overall, but Ole Brook broke even on two-point shots, and 17 offensive boards gave them second chances. The Panthers were less impressive on three-point shots, hitting only 3-of-19 attempts for 16 percent.

Even worse, Brookhaven hit only 4-of-15 free throw attempts for 27 percent.

“I’m gonna call a hypnotist and see if I can hypnotize these guys and get them to shoot better,” said Brookhaven coach Marcus Flippin. “We can’t make a free throw. We’ve got to fix that before district.”

The defense did manage 21 rebounds and seven steals before it allowed McComb back into the game in the second half. The Panthers owned the first half, outscoring the Tigers 16-11 in the first quarter and 19-13 in the second. McComb took over late, leading the third quarter 13-7 and even the fatal fourth 14-13.

Brookhaven turned on their own pressure defense late in the fourth quarter to slow down McComb’s attack, and it worked.

“We helped each other, had each other’s backs,” said junior John Hilbert. “We gotta keep doing that and we’ll win some games.”

The win takes Brookhaven to 6-5 on the year.

The season has been unkind to McComb — a team heavy with seniors and freshmen and a single sophomore in between — as they fall to 2-8. Tigers coach Leon Harris said he was proud of his team for fighting back into the game late, even though the comeback was unsuccessful.

“We have a young team, and sometimes we get down on ourselves when we get down early, but tonight we stayed in it,” he said. “I thought we gave the fans a good show.”

Robinson led the Panthers with 13 points. Hilbert was next with a dozen points and a dozen rebounds.

The Brookhaven Academy Cougars’ shooters went cold in a 50-32 loss to Parklane, but the Lady Cougars surged late to... read more