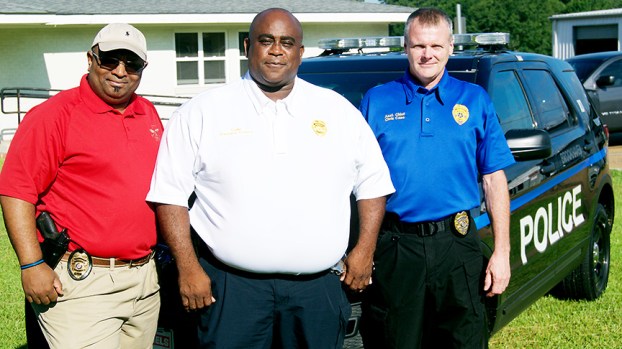 Photo by Donna Campbell/Pictured are, from left: Command Maj. David Johnson, Police Chief Kenneth Collins and Assistant Chief Chris Case stand with one of the vehicles with the new designs.

For criminals, scrolling through social media is like shopping online. And for some, it’s a business.

“Demand for stuff goes up. People are desperate and they want things and don’t want to pay full price for it,” he said. “Criminals out there are stealing exactly what their clientele wants. They’ve done got specific. Criminals are customizing. Christmas criminals are taking orders for merchandise.”

He advises female shoppers to leave the large purses at home and only carry bags large enough for the essentials.

Shoppers should schedule their excursions to stores during daylight hours if possible and be aware of their surroundings at all time.

Don’t be on a cell phone and watch for anyone loitering in the parking lot, especially near your vehicle, he said. Shoppers should ask a store employee for an escort to a vehicle if they feel unsafe.

Collins said that vehicles should always be locked and packages kept in the trunk area preferably. If the trunk is full, make a trip home to unload.

“Don’t let your vehicle fill up,” he said. “They’ll break your window and go in and get them.”

Caution should come after the gifts are unwrapped, too. Boxes for gifts should be cut up and discarded in garbage cans, not placed at the curb so criminals know what new items are in the home, he said. That warning is especially useful for large screen televisions.

“Break them down and put them in the garbage,” he said.

Merchants should also be aware that criminals will shoplift items then bring them back to get money back.

“They’ll come in and start an argument or cause a scene as a distraction so someone can steal something or so they can return something,” he said. “They’ll steal from the store and turn around and get a refund on it.”

Collins said he always sees more incidents of theft during the holidays.

“Christmastime, the crime goes up because criminals get desperate,” he said.

Fate was certainly at play the day Angel Pappas and her mother-in-law Holly decided to open their new consignment shop,... read more