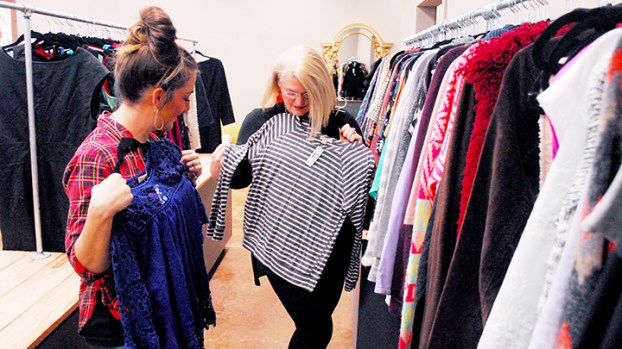 Photo by Trapper Kinchen/Pictured are, from left: Angel Pappas and Holly Pappas, examining pre-owned clothing for sale in their consignment shop, Ruby and Ethel’s.

Fate was certainly at play the day Angel Pappas and her mother-in-law Holly decided to open their new consignment shop, Ruby and Ethel’s.

A newly-remodeled family property on East Monticello Street recently became vacant, and — after much planning — Pappas decided to seize the opportunity to follow her longtime business goal.

Interestingly enough, the shop’s name has nothing to do with nostalgia. Ruby and Ethel’s is actually an homage to Pappas’s 5-year-old daughter and 6-year-old niece.

“Ever since they were very small, they’ve bickered like little old ladies,” she said. “So, we nicknamed them Ruby and Ethel.”

The store’s theme is recycling with a chic twist.

Ruby and Ethel’s clothing displays are made from original cabinets from the old Lofton’s Department Store, and the building’s walls are paneled in rustic reclaimed wood harvested from various downtown locations.

“Even our business cards are made from recycled paper,” Pappas said laughing.

She believes there is still a great deal of life left in the things most people discard. Her store is designed to put gently-worn clothes, shoes and accessories to good use, and her philosophy is to encourage re-use through re-sale.

“As long as it’s in good condition, we accept all lightly worn, stain-free clothing,” she said.

All items consigned at the store are sold at a 50/50 profit split, where the shop keeps half of the earnings and the seller pockets the rest. Pappas believes consigning old items is fundamentally more practical and resourceful than selling online.

“We want you to get your money’s worth,” she said.

Since the shop’s grand opening Saturday, it has welcomed a steady stream of customers. Pappas said they haven’t seen big crowds, but she and her team have been able to personally interact with everyone who has walked through their doors.

Pappas and her mother-in-law see their business as an ever-expanding, living enterprise. She said there are still improvements yet to be made and plans that still need to be laid, but she is well pleased with how things have turned out thus far.

The back of the store functions as a showroom for smartly-arranged consignment items, and the front of the building serves as a gallery for local art and handcrafts.

“We want to help support other local businesses,” Pappas said.

At 28 years old, she is a busy woman. With two small children, a business and a home to run, Pappas said her mother-in-law and husband have been tremendous helps to her.

“My husband Mitch works until 7 at his job, then he usually comes by the store,” she said. “After that, he goes to the house and runs our farm.”

He even built all of the store’s racks and shelving.

Holly Pappas believes she and her daughter-in-law work well as a team.

“We both bring some really great stuff to the table,” she said. “We’re both really strong-willed, but we’re also calm.”

Because Ruby and Ethel’s is one of many consignment shops in Brookhaven, the Pappases hope that downtown will become a mecca for shoppers looking to buy consigned items. Pappas hopes locals will stop by and see what their store has to offer.

She also said they’re still looking for items to consign. Men’s and children’s clothing is in particularly high demand at the moment.

“We’ve got something for everybody,” she said.

Unemployment at lowest rate in 18 years for Lincoln County

Lincoln County’s unemployment rate for October was 4.3 percent, its lowest percentage since November 1999 — the last time the... read more