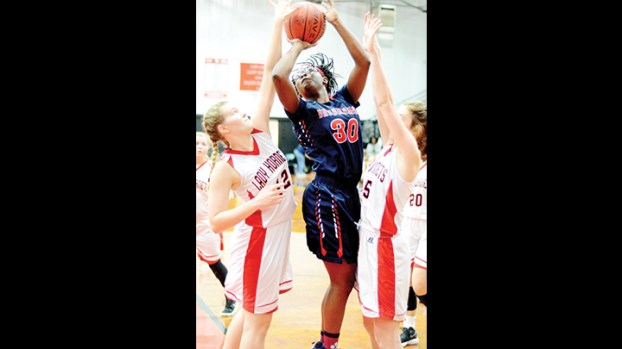 Loyd Star’s Lady Hornets were completely outmatched against the Lady Panthers of Brookhaven Tuesday night, losing on their home court in a 64-22 massacre that was over by halftime.

Brookhaven’s girls were too strong, too fast and too aggressive for the Lady Hornets, who wilted before the Lady Panthers’ full-court defense while coming up encircled and out of place on defense. Brookhaven attacked into the lane for easy layups for three quarters, and even its reserve players rained down jump shots to outscore Loyd Star’s starting lineup 18-8 in the fourth.

“It means a lot for everyone to get an opportunity to play and show why they belong on the team,” said Ole Brook junior Nefritiria Carter. “We put a lot of effort into the game and shot with confidence.”

With big-time starters chilling out on the bench with towels on their heads by the end of the third quarter, Carter, a reserve player, made the most of her insertion in the fourth. She popped a pair of impressive three-pointers that didn’t even scrape the rim and added another inside shot for eight total points in the end.

Sophomore Sharquita Cook isn’t in Brookhaven’s starting lineup, either. The young Lady Panther also capitalized on her time on the court, hitting a trio of shots for six points in limited playing time. She was fired up to see the white net flopping when she shot.

“It was awesome. I was thinking to myself, ‘Man, this is going great,’” Cook said.

It went great for all the Lady Panthers. All 14 girls on the roster got playing time against Loyd Star, and 12 managed to score. Only seven of the 15 Lady Hornets got into the game, as the starting girls never got close enough to take a break.

“We just had more athleticism. They didn’t have the ball-handlers to match us,” said Lady Panthers coach Preston Wilson. “We got to play a lot of people tonight and our young ladies shot the ball well.”

Brookhaven owned every quarter, outscoring the Lady Hornets 19-7 in the first, 21-7 in the third and 18-8 in the fourth. The second quarter was Loyd Star’s high point, when their double-stack delay offense held the Lady Panthers to just six points.

But even then the white jerseys were unable to score. Brookhaven led 25-7 at halftime and Loyd Star had no answers.

“It all went wrong,” said Lady Hornets junior Meagan Poole. “We just didn’t work good together or communicate at all. We kept throwing the ball away. We didn’t hustle, and they did — a lot.”

They were limited to only 15 rebounds on the night, while the tally marks in the turnover column read like a prisoner scratching out his time on the cell wall. Loyd Star’s play-callers continually dribbled into half-court traps and got mugged for 27 turnovers on the night.

Loyd Star coach Gene Britt knew chances were slim for his 2A country girls against the 5A power of Brookhaven, but he was still disappointed in the Lady Hornets’ play.

Maybe they were confused, maybe they lost heart as the scoreboard ran off from them. Either way, it was plain to see the white jerseys weren’t playing with enthusiasm.

“We kind of helped them out a lot. Bad passing, turnovers — you’re supposed to be breaking and running but you’re just standing around, watching. You can’t beat a good team like that,” Britt said.

The Lady Panthers host Warren Central Friday night, then they’re off for Christmas, returning Dec. 28 for a game against the Lady Tigers at the McComb Coca-Cola Holiday Tournament.

The Lady Hornets are off on an extended break. They return to action on Tuesday, Jan. 9, in a home game against Bogue Chitto.

The Lady Bobcats played hard and aggressive on their way to a 50-32 victory over the Lady Cobras Tuesday. Bogue... read more