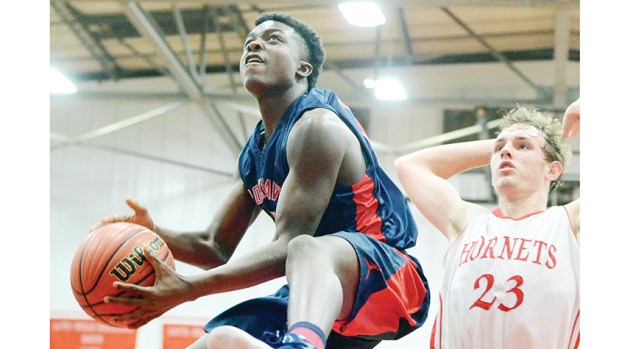 The Ole Brook Panthers blasted Loyd Star’s Hornets Tuesday night, shaking free from a tight first quarter to run off with the rest of the game in a 68-39 road win.

The Hornets gave as good as they got in the first quarter, but a 2A squad can only hang with a 5A team for so long. Loyd Star’s starters had to dig as long as they could while Brookhaven sent in fresh legs at every opportunity to keep the wheels turning on its high-pressure defense. The Panthers’ lead was 34-20 at halftime and the Hornets were spent by the fourth quarter.

“Our goal was to push the ball down the court all night long and play hard,” said Ole Brook sophomore Byrion Robinson, who was voted defensive back of the year by his teammates at the annual football banquet the night before. “We executed our offense and this was a great team win.”

The team win involved all the Panthers. Reserves were in early for Brookhaven, with 14 players listed on the score sheet, 11 of whom scored baskets.

Brookhaven coach Marcus Flippin said he used the lead to experiment with the lineup and would continue mixing up his depth chart to find talent and get his players accustomed to team play.

“We’ve got more numbers. Loyd Star played hard and they’re very well-coached, but when you’ve got five guys to play the whole game and I’ve got 14 or 15, that’s the difference,” he said.

Flippin’s starters and reserves scored all night, winning the scoreboard every quarter. Loyd Star was almost Brookhaven’s equal in the 16-11 first quarter, but the Panthers carried the third 18-9, the fourth 19-11 and the final period 15-8. The Panthers shot an even 50 percent on field goals and hit 38 percent of their three-pointers.

But the real work was done on defense.

Loyd Star led both teams in rebounds, and the Hornets’ 14 turnovers were manageable, but the Panthers took away 17 steals on the night with a mixture of full- and half-court man defense.

The harassment from Ole Brook was constant, and it showed in the Hornets’ 35 percent shooting.

“We got some rebounds and played good help defense,” said Brookhaven junior Axavian Jones. “We have to keep working on our defense and learn to play help better and better.”

Loyd Star coach Gene Britt tried to slow Brookhaven down with the same double-stack, ball-control offense he used in the girls’ game, but the Panthers eventually cracked the safe and plundered the basketball and scored in transition.

“Once they get 12 points ahead you gotta start playing basketball,” he said. “The first quarter was pretty good for us. If we could have played the next three quarters like that we could have hung with them.”

Brookhaven took the lead in the second after an incident on the court that cost the Hornets their team leader.

With 7:36 remaining in the first half, one of the Panthers smacked Loyd Star junior Dane Smith square in the face as a group of players fought over a rebound. Smith hit the floor, tried to rise and wobbled back down with both hands on his head.

Ole Brook pushed on to score while he lay there, and the officials didn’t blow the play dead until after the basket. Loyd Star’s impassioned fans let the stripes know what they thought about it while Smith was helped to the locker room.

He would return for the second half, squinting like a pirate, but the Panthers went on a 16-7 run without him.

“Their momentum got them going,” Smith said. “They made a couple of shots and they were off. Their defense was just too quick for us.”

Jones and junior Alex Castillo had two points each.

Sophomores Reese DeHart and Stephen Mills had three points each, and junior Gabe Netterville had a single free throw late.

Brookhaven hosts Warren Central Friday night. Their next game will come against McComb on Dec. 28 at the McComb Coca-Cola Holiday Tournament.

The Hornets are done for the year, returning to the court Tuesday, Jan. 9 for a home game against Bogue Chitto.