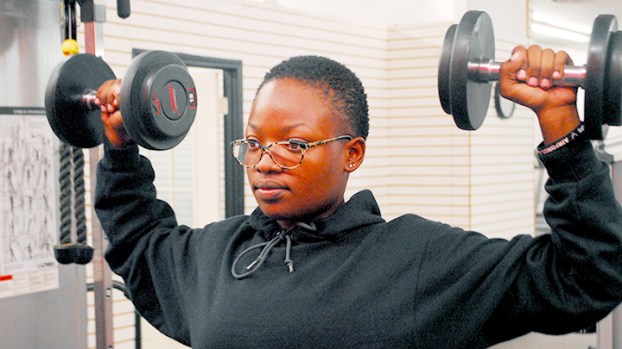 Photo by Trapper Kinchen/The road to successful weight loss was arduous for Jada Hardy, but her perseverance paid off.

For much of Jada Hardy’s life, she felt stuck. But, at 19 years old, she decided to reach beyond her circumstances and access a little of her hidden potential.

“When I was in high school, I felt like I was incapable of achieving anything because of my weight,” she said.

An Air Force recruiter came to campus at the end of her senior year, and she liked what he had to say. Hardy decided to join up, hoping it would give her an opportunity to serve American interests abroad.

“I always wanted to help people, but didn’t know how,” she said.

The Air Force said Hardy — who weighed 221 pounds — would have to lose nearly a fifth of her body weight to be eligible for recruitment. So, after considering her options, she decided to become a member of an area fitness center.

“I was so intimidated, and I didn’t want to go into the gym,” she said. “But, when I finally walked in, there was a total sense of peace.”

In just five months — with the help of personal trainer Tra Collins — she lost over 60 pounds. And, in a moment of tender triumph Monday, Hardy finally signed her contract with the Air Force.

“I just took a deep breath and thanked God,” she said.

Even now, having officially met her goal, Hardy can’t believe how far she has come.

“For awhile, even though I was losing weight, I still felt like I was always so far away from my goal,” she said.

Hardy’s faith kept her motivated during her weight loss journey. When she felt like giving up during a workout, she said she would often pray for strength and be able to press onward.

She leaves for basic training in Lackland, Texas in the new year, and Hardy said she looks forward to getting her new career underway. Training should last nine weeks, and, after completion, she’ll get her first official posting.

“There were many times when I thought I couldn’t do it, but, with God’s help, I’ve actually done it,” she said.

Her long-term ambitions extend beyond the Air Force. Hardy ultimately wants to join either the CIA or the FBI, and she believes working for the military will help prepare her for a future career in law enforcement.

“Chase your dreams at all costs,” she said. “If your dream doesn’t scare you, it’s not big enough.”

For the first time in as long as she can remember, Hardy feels strong. That newfound strength goes beyond her physique and makes her feel empowered on every level.

She said weight loss has enlightened her in a way she never expected, and she no longer feels obligated to entertain other people’s plans for her life.

“If there’s something you want to do, you just need to take that first step,” she said.