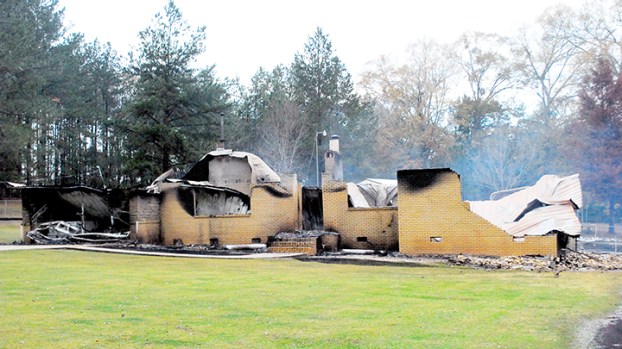 Photo by Trapper Kinchen/Lawrence County Sheriff Lessie Butler said Henry Peavey was shot and then set on fire inside his home on Frog Ridge Road. The suspect, Tony Wilson, remains at large.

A man accused of murder, assault and arson in Lawrence County remained on the run Wednesday night, authorities said.

Butler said Wilson allegedly shot Peavey and then set him on fire in the elderly man’s home along with his wife. Peavey would have turned 79 on New Year’s Eve.

The area is just southeast of East Lincoln about three miles inside Lawrence County between Jayess and Monticello.

Sheriff’s deputies with Lawrence, Lincoln and Walthall counties, other law enforcement agencies as well as Mississippi Highway Patrol SWAT units tracked the suspect throughout Tuesday and into the night. The search was temporarily suspended at 3 a.m. Wednesday then resumed at daylight, Butler said. .Mississippi Bureau of Investigations, state Department of Corrections and Mississippi Department of Wildlife, Fisheries and Parks assisted also.

State fire marshals were expected to be on scene Wednesday to investigate the burned structures, he said. Peavey’s body has been sent to the state crime lab for an autopsy, said Warren Strain, communication director with the Mississippi Department of Public Safety.

Butler said authorities suspect Wilson killed the retired educator over a property line battle and then set Peavey’s house on fire with him and his wife in it. It is not known if Kathryn Peavey was shot as well.

The Peavey house and another structure were burned after the shooting, he said. One building was a total loss.

A helicopter circled the area as teams from the various agencies searched through the woods surrounding the properties. Tracker dogs from Angie, Louisiana, were also brought in.

Butler believes Wilson could still be in the area around Frog Ridge Road but it will be difficult to find him.

“He’s one of those kind of people who are real familiar with the woods,” he said.

Butler got the call about the shooting about 11:45 a.m. Tuesday.

While Butler rounded up deputies, he had the woman call 911 to make the report to have a tape of the conversation.

Though the two men had squabbled for years over the ownership of the property, Peavey had been granted the land by a court ruling.

Robert Langille, Wilson’s brother-in-law, told The Associated Press that Wilson’s father had paid taxes on a small parcel of land for years, but that Peavey had won legal title.

Wilson had recently bonded out of Lawrence County jail where he’d been held on charges of violating a restraining order that was meant to keep him off of the Peaveys’ land. Butler said when deputies attempted to serve the warrant for violating the order in October 2016, Wilson allegedly pulled a gun on them. He was charged with aggravated assault on a law officer, he said. Wilson’s court date for that charge is in January, Butler said.

Wilson’s home is less than a mile from the Peaveys’ house, Butler said.

Neighbor Ann Givens said someone cut a fence down on Peavey’s property last week not long after he’d put up a new one.

Anyone with information about Wilson’s whereabouts is asked to call the Lawrence County Sheriff’s Office Metro Crime Stoppers tip line at 601-582-7867.

Chad and Adam Smith of Smith Bros. Collision Center & Truck Accessories wanted to get back to the basics of... read more