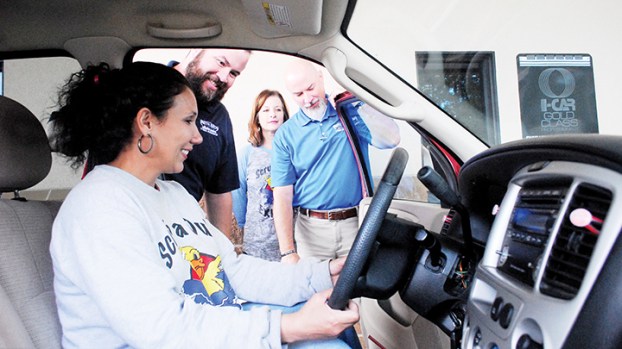 Chad and Adam Smith of Smith Bros. Collision Center & Truck Accessories wanted to get back to the basics of Christmas. So, they concocted a plan to give one deserving family a very special gift — a gently used, red Mazda Tribute.

“We were able to acquire this vehicle, and, because Christmas was coming up, Adam said we should plan a car giveaway,” Smith said.

The charity contest was organized rather quickly, with the brothers getting started in October. But, by the beginning of November, they were ready to roll.

“It was a little bit quicker than we would have liked to have done it, but it really worked out fine,” Smith said.

They wound up sending seven applications out to several Brookhaven civic organizations, hoping to garner a list of deserving nominees.

As providence would have it, one of the applications wound up on the desk of pastor Greg Warnock at Brookhaven First Baptist Church. He tried to find a qualified family to recommend, but his search came up empty.

However, on Dec 1 — the day the Smith Bros. submission was due — Andrew and Karen Hickman reached out to Warnock, hoping the church could help one of their employees, Kimberly Lambert.

“She’s been the best help at work,” Karen Hickman said. “And, one day, she ended up sharing some personal needs with us.”

Lambert first started in customer service at the Hickman’s car wash, Scrub-A-Dub, in August, and she proved to be an incredibly efficient worker.

Lambert is the mother of four children, and she had no vehicle of her own.

Warnock and the Hickmans decided she would be the ideal candidate for the car giveaway, and, a few days later, Smith Bros. selected her as their winner.

“It makes our hearts feel so good to know she got the car,” Hickman said.

Lambert was stunned when her employers asked her to fill out the vehicle application.

Consequently, she was stunned when Smith Bros. told her she had won the car.

“It was unbelievable, and I was totally in awe,” Lambert said.

“Adam asked if we would pay the six-month premium on the car, and we were more than happy to do it,” Farm Bureau agent Sam Sones said. “It’s a great way to plug into the community.”

“Christmas has become so commercialized,” Smith said. “And this is about getting back to the true meaning of Christmas, giving back to other people.”

Lambert said winning the giveaway has actually inspired her to pay some of her good fortune forward.

“I know how it made me feel to be helped out,” she said. “So, it would be awesome to make somebody else feel like that.”