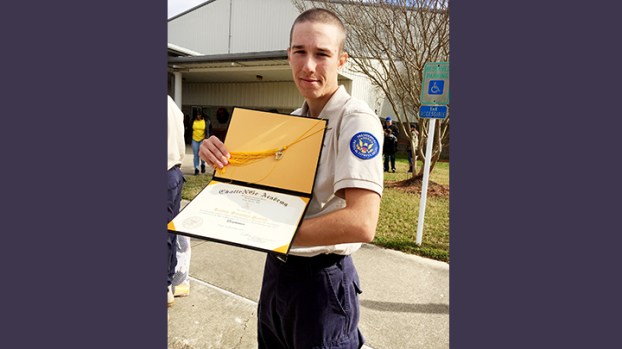 Photo by Janis Rushing/Raven Smith wanted to earn his diploma, and, after three months of hard work, he met his goal.

December is generally considered a month of celebration, with people coming together to open presents at Christmas and ring in the new year on the 31st. But, for a few local teens, December signifies something much greater than gifts and fireworks. For them, it represents the hard-won achievement of an academic goal.

YCA is part of the National Guard Youth Challenge Program, and it serves at-risk youth of both genders between the ages of 16 and 18. The program lasts 22 weeks, and, when all is said and done, each graduate is prepared to either enter the workforce or matriculate to college.

Smith was encouraged to enroll in YCA by Janis Rushing, his tutor at West Lincoln Attendance Center.

“In the past, we had a student graduate from the academy,” she said. “So, that’s how we knew about it.”

Rushing saw a great deal of potential in Smith, whom she considered an extraordinarily bright student with an abundance of excess energy.

“I knew this program was in place to help him succeed,” she said. “He wanted to earn his diploma, and I knew they could help him achieve that.”

The process through which Smith was accepted to YCA was somewhat painstaking. Among other things, he sat through an interview and went to a meeting at the National Guard Armory before being selected for admission.

“I got to help him fill out the paperwork,” Rushing said.

Once enrolled in the program, Smith thrived. He excelled at his coursework, and he responded very well to YCA’s military-style social structure.

“It’s unlike a lot of programs that exist in that this program isn’t set up as a boot camp,” Rushing said. “Students like Raven do well in this program, because their days are broken up into activities and classes. And, what’s great is, the classes get down to the meat of what they need to know without going off track.”

Before long, Smith was doing so well with his lessons that his instructors asked him to tutor a few of his classmates.

“They said Raven was always taking care of people,” she said.

Leadership is one of the key tenets espoused by YCA, and, according to Rushing, Smith proved extraordinarily adept at helping his peers.

“He was recognized for exemplary conduct, and received four awards while he was there,” she said.

After three months of hard work, Rushing and Smith’s mother, Sherry, watched him receive his diploma.

“I am really proud of him,” Rushing said. “He did such a great job.”

YCA serves an important role in Mississippi’s educational landscape. It helps students thrive who might not otherwise experience academic success.

Smith is a example of how perseverance, organization and grit can catapult a person to unexpected achievement when someone takes the time to lend them a hand.

“A lot of times, they just need somebody to believe in them,” Rushing said. “And I love them.”

A Brookhaven man is putting his faith in folks with dirty hands. Pat Nelson is organizing the Brookhaven Community Garden... read more