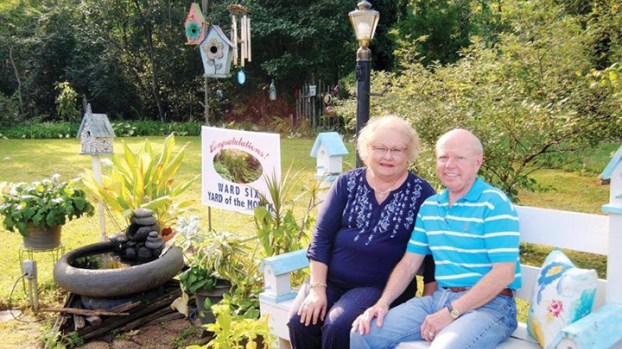 Since late summer, Ward 6 Alderwoman Shelley Harrigill has worked hard to recognize some of her district’s most striking lawns. Her initiative — called “Yard of the Month” — is founded on the idea of boosting neighborhood pride.

“Since starting this, I’ve seen a lot of houses I’ve never noticed before,” she said.

Ward 6 is one of the city’s most sprawling districts, and Harrigill wanted to do something to make her constituents feel a little more connected with one another.

“I wanted to highlight people who like working in their yard,” she said.

That being said, with winter well underway, Harrigill’s attention has recently shifted from flowers and greenery to decorations and lights.

“In the winter months, people don’t have much of a yard, so to speak,” she said. “So, I like to find pretty places with interesting displays.”

The current November/December Yard of the Month belongs to Velma and Cecil Estess of 1533 New Sight Drive, and Harrigill said their home is especially lovely this time of year.

“The Estesses always do a great Christmas display,” Harrigill said.

Darlene Smith’s house is another fine example of the type of lawn that usually catches Harrigill’s eye. Smith was the recipient of the October/November monthly award, and her address is known for its festive seasonal displays.

“Darlene really goes all out for the holidays, and it’s really worth driving by and seeing how her hard work pays off,” she said.

One of the main reasons Harrigill started the Ward 6 Yard of the Month program was to bolster community togetherness and let the people in her district know their hard work is appreciated.

“Darlene even decorates her mailbox and porch,” Harrigill said. “She takes a lot of pride in her home.”

Like Smith’s residence, Terry and Jane Leary’s home at 1601 North Jackson St. is worth seeing around the holidays. They won the September/October award.

“The Learys got Yard of the Month because their yard is just so beautiful,” Harrigill said.

A well-kept lawn is the main requirement for winning the monthly prize, but seasonal decorations are also greatly appreciated.

“The Learys are on the main thoroughfare, and they want their house to look pretty during the Christmas season,” Harrigill said.

Since inaugurating the award in August, Harrigill has spent a great deal of time driving around her ward. She said she hopes more people will take the time to explore the district and nominate their neighbors’ homes for Yard of the Month.

“It’s exciting to get out and explore the neighborhood,” she said.

For Harrigill, choosing a Yard of the Month is about more than just congratulating someone on the quality of their garden. It’s about recognizing the hard working people of Brookhaven’s sixth ward.

“People really have a lot of community spirit,” she said.

As 2017 sinks below the temporal horizon and 2018 dawns, the Brookhaven School Board took time at a recent meeting... read more