Fireworks safety a must for New Year’s 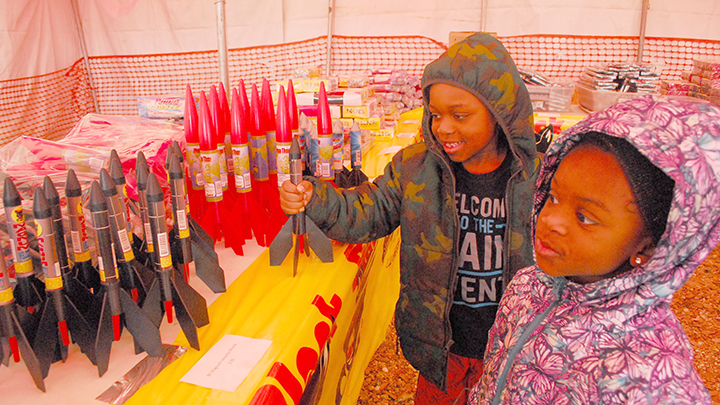 On New Year’s Eve — as midnight approaches — the sky will be ablaze with the multicolored, glowing blooms of fireworks.

Ethan Harris, a salesperson at Hood’s Fireworks on Hwy. 84, said basic precautions should be carefully taken before lighting anything combustible.

“Be sure to be in an open area, and wear some gloves,” he suggested.

From the moment they first ignite, firecrackers are incredibly explosive. Harris believes the key to protecting yourself during a launch is to avoid shooting near anything flammable.

“Definitely stay away from trees,” he said.

He has worked at Hood’s for the past four years, and Harris has witnessed firsthand the dangerous consequences of poorly handled pyrotechnics.

“The worst accident I ever saw was one of the artillery shells falling over and shooting into a house,” he said.

It’s generally a good idea to shoot fireworks from a level surface in order to avoid any accidental, horizontal ignitions. Harris said it’s also wise to avoid the residual, sulfuric fumes that linger after a firecracker combusts.

“You definitely don’t want to inhale that,” he said.

According to Harris, New Year’s is the busiest time of year for Hood’s.

“A lot of people come with their kids,” he said.

Leanne Carter brought her son and daughter to Hood’s on Tuesday, and said they are finally old enough to enjoy firecrackers under her supervision.

“This is the first year they’ve wanted to pop fireworks,” Carter said. “They used to be too afraid.”

“My suggestion is to make sure you’re away from homes, automobiles and anything else flammable when shooting fireworks,” he said.

Hood’s offers a variety of merchandise, including small items for families.

“We sell a lot of the Super Snaps,” Harris said. “They’re the little things you throw on the ground, and they pop.”

The largest thing available for purchase at Hood’s is a barrel-shaped pyrotechnic mechanism called “The Big Man.”

No matter which kind of fireworks you shoot, be sure to properly extinguish the flame before discarding each spent cartridge.

“Spray some water on them, just in case,” Harris said.

Hood’s Fireworks has two locations in Lincoln County, one on Hwy. 84 East and the other on Hwy. 84 West. They also have sites in Hazlehurst and Crystal Springs.

Harris said the New Year’s selling season should last until Jan. 3, and Hood’s is open from 10 a.m. to 10 p.m. during the week.

Radio system is a WIN for Brookhaven Police