Former BHS Panther moves up to Alcorn after Southwest 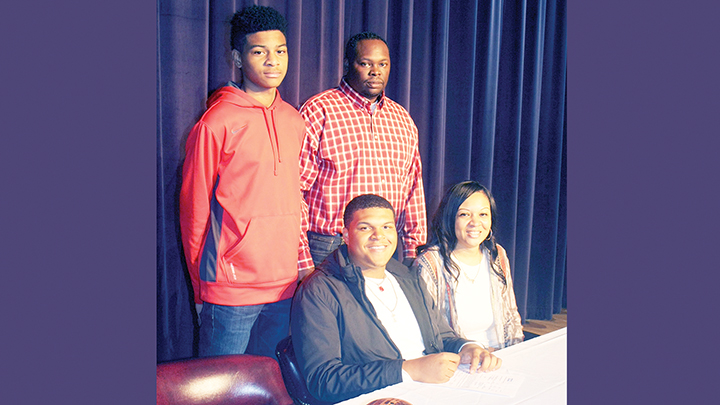 He didn’t get to participate, back then.

On national signing day 2016, senior football players across the country sat at decorated tables with mommas and coaches. They signed scholarships and ate cake. Folks took their pictures.

Nobody wanted Brookhaven offensive lineman Wanya Morris. He went on to Southwest Mississippi Community College with little fanfare. He started for the Bears, took his licks, earned his keep.

Morris wanted to wipe out the old disappointment, replace it with victory. When Alcorn State University noticed his play and offered him a scholarship, he came back to Brookhaven High to sign it.

“I wanted to come back here and do it right,” Morris said. “Coach (Tommy) Clopton helped me get to where I’m at, as a man and as a football player.”

After the big crowd that came to see Ole Brook’s 2018 seniors sign their scholarships thinned out, they redecorated a table in purple and gold for Morris and he pledged himself to Alcorn.

Morris said he chose ASU because the program is building success. ASU won the Southwestern Athletic Conference in 2014 and 2015, and played for it in 2016 and 2017.

“They know what winning is,” Morris said. “And it’s a nice environment on campus. The school is not too big, not too small. It’s perfect.”

Morris said he is ready to get on the field and work. At 6-2 and 284 pounds, he knows some guys will be bigger and faster than him, but that doesn’t bother him.

“I play from the heart. These guys might be bigger than me, but I’ve got the bigger heart, and that gives me the advantage,” Morris said. “If I put in the work, it will come. It’s all in God’s plan.”

Morris’s mother, Dena Poole, said her son’s scholarship to Alcorn is an honor. She said her family’s experience with the school during recruiting efforts has been “wonderful,” and she plans to attend every game.

“We always want to be there for Wanya,” she said. “From pee-wee to Southwest, I don’t think I’ve ever missed a game.”

Brookhaven coach Tommy Clopton said he’s proud of his former player for earning the right to compete at ASU.

“He didn’t have what he wanted when he came out of high school, but now he’s put in the work and earned an opportunity to continue his career,” Clopton said. “We look forward to seeing him play at Alcorn.”

“He has the athletic ability and intelligence to play multiple positions,” he said. “I look forward to seeing his career move on.”