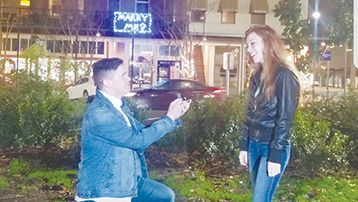 Photo submitted/Bolton Carnley took a knee Saturday to propose to his girlfriend, Sydney Jackson, in Railroad Park. Carney created a “Marry Me” sign out of lights, which he hung from the balcony above Brookhaven Barber Shop.

Sailor asks ‘Marry me?’ in lights in downtown Brookhaven

Bolton Carnley and Sydney Jackson will pledge their undying love to one another Thursday night before God and their mamas. But before they could say “I do,” Carnley had to ask for his girlfriend’s hand in marriage.

With time ticking down, that question had not be popped and the bride-to-be was getting a little nervous.

Jackson, 18, lived in Wesson before moving in with her boyfriend’s parents this year. Carnley, a 2016 graduate of West Lincoln High School, joined the Navy a year later and has been training in Illinois.

Jackson, the daughter of Billie and Curtis Davis of Enterprise, first met Carnley four years ago when he was dating her cousin. She wished he’d notice her and when things didn’t work with her cousin, she held out hope he would.

He and her older brother were best friends, so eventually he did, and they began their romance officially a year ago.

The two have talked about marriage and even planned a wedding. Carnley is home for three weeks before heading to California for duty and they decided to get married Thursday evening at Old Towne Church.

The only thing missing was the question.

Jackson knew it would be coming, she just didn’t know when, where or how.

Her boyfriend was acting strange Saturday.

While she was out running errands for the upcoming nuptials, he was busy with his dad building a lighted sign that played heavily into his plan.

She and Carnley went out to dinner to Georgia Blue with her future in-laws, Quade and Kim Carnley.

“His dad kept eyeballing me and Bolton the whole night,” she said.

After dinner, Quade Carnley suggested they walk around downtown and take pictures of the lights.

They sat at a bench near the Foster Cabin and Quade Carnley suggested she turn and look at the lights. She got up and turned around to see the homemade signed hanging from the balcony over Brookhaven Barber Shop. It lit up with the question, “Marry Me?”

She believes she’ll be marrying her best friend Thursday.

“He’s been a friend of mine for so long, that attraction was always there. He’s honestly my best friend,” she said. “Fourteen-year-old me never pictured my life like this.”

The symphony is coming to Brookhaven

It has been said that music is transcendent and offers mankind a unique outlet for emotional self-expression. If that is... read more