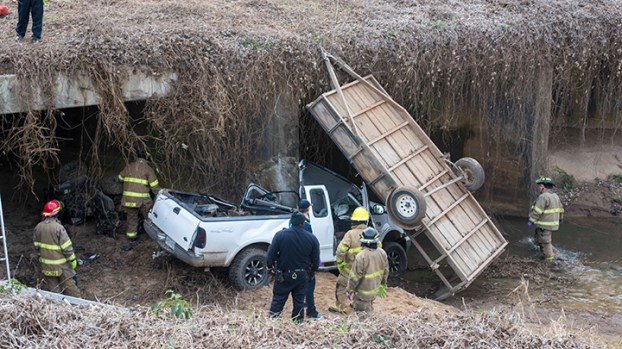 Vicksburg Police, Fire and EMS respond to a single vehicle accident resulting in one fatality and injuring another when it the left the roadway Highway 61 N and fell near a bridge at N Washington Street Tuesday. (Courtland Wells/The Vicksburg Post)

Christopher Fortenberry, 19, was taken to Merritt Health River Region Hospital and later airlifted to University of Mississippi Medical Center in Jackson, where he remains in intensive care. He suffered several broken bones and internal injuries, according to a Facebook post on the Co-Lin Wolfpack Baseball page confirmed by the college.

A UMMC spokesperson said Fortenberry was in critical condition.

Fortenberry, a Co-Lin sophomore from Pearl, was the passenger in a Ford pickup driven by Landon Overstreet, 19, of Clinton. The two were hauling a four-wheeler on a flatbed trailer when the truck left the road at the intersection of Hwy. 61 North and North Washington Street, crashing into a concrete culvert around 11 a.m. Tuesday.

Overstreet was killed in the crash.

Sailor asks ‘Marry me?’ in lights in downtown Brookhaven

Bolton Carnley and Sydney Jackson will pledge their undying love to one another Thursday night before God and their mamas.... read more