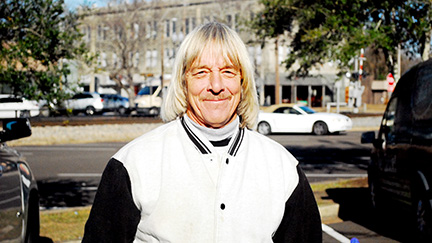 Mike Griffith is a successful business owner, a passionate pizza connoisseur and a man worth getting to know.

At 58 years old, he has spent his entire life in Lincoln County. Griffith grew up in Brookhaven, but has lived in Bogue Chitto for over 30 years.

He married his wife, Sandra, 32 years ago, and they are the proud parents of three grown daughters.

Providence brought the Griffiths together in the 1980s, and they met somewhat inadvertently while he was giving her a roofing estimate.

“I was actually looking at something on her house at the time,” he said

Griffith has been the proprietor of Mike’s Economy Roofing for close to 40 years, and he considers himself a dedicated craftsman. In fact, most of his time is spent on the job.

He is proud of his industrious personality, and believes his dedication to hard work is a virtue.

“My work ethic is my best quality, because that’s really all I do,” he said, smiling.

But, even though he’s a busy man, Griffith reserves Sundays for worship. Every Sabbath, he and his wife attend services at The Well in McComb.

Meanwhile, when summer rolls around, his family’s most treasured tradition is driving to the Smoky Mountains.

“We go to Gatlinburg about every third year,” Griffith said

He also makes time for his favorite sport — NASCAR — and auto racing is something he and his wife always like to watch together.

Whether he’s enjoying a race or unwinding after a long day at work, Griffith loves having a warm slice of pizza in his hand.

“My favorite is pepperoni pizza from Domino’s,” he said.

But, if there is one thing Griffith couldn’t live without, it’s a cold drink.

When all is said and done, Griffith thinks of himself as an open book, and he is frankly a man of little mystery.

“Everybody who knows me, knows me,” he insisted. “I work all the time, so I don’t have any secrets.”

Lastly, if Griffith could have any supernatural ability, he would like to be able to see into the future.

“Maybe, I could change something that wasn’t going to turn out good,” he said.

After several weeks of detailed investigation, the Lincoln County Sheriff’s Office made six arrests Wednesday in connection to a large... read more